Hozier: Why Seamus Heaney's last words mean so much to me 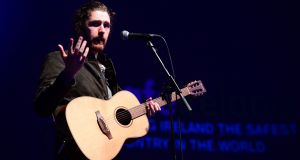 Hozier: I share the worries and anxieties of what we may be facing. Photograph: Dara Mac Dónaill/The Irish Times

Singer-songwriter Hozier has spoken of the “pride” he felt both in his generation and in the democratic process following last year’s abortion referendum. Taking part in a reader Q&A on the Guardian on Monday, the Bray singer, who releases his second album, Wasteland Baby!, on March 1st, also described the last words of poet Seamus Heaney – Noli timere (don't be afraid) – as “something very beautiful”, before saying St Kevin and the Blackbird was his favourite Heaney poem.

When he was asked about the referendum on repealing the Eighth Amendment, he praised citizens for exerting pressure on the Government to call a referendum and for “pushing for it tirelessly until the government couldn’t kick the can down the road any longer”.

“The Citizens’ Assembly I thought was incredibly worthwhile as well, it did prove to be a very helpful democratic exercise,” he said. “But for me it reaffirmed the idea and the fact that all things are fought for, all rights are fought for.

This is not the first time Hozier has addressed the issue. The singer was outspoken in his support of the Yes campaign last year, urging followers on social media to join him in “granting those in a crisis pregnancy compassionate access to healthcare in Ireland”.

Elsewhere on the political spectrum, the singer was asked whether his listeners could expect to hear him broach environmental issues on Wasteland, Baby!

“There’s references to it,” he responded. “The intention isn’t exactly to do songs about causes but to credit the reality of things, how you interpret the world. I can only write about how I experience these issues, and I share the worries and anxieties of what we may be facing.”

Outside of politics, Hozier touched on his admiration for the late Seamus Heaney.

“I’ve a few Seamus Heaney books,” he told one fan. “On the road I had downloaded a collection of recordings of him reading his own poems, which I think is really special when you can hear a poet’s own voice giving voice to the work.”

Such is his fondness for Heaney that he has the poet’s famous last words – Noli timere – tattooed on his arm.

“It’s something he texted his wife, apparently, in the last moments of his life,” he said of the tattoo’s significance. “It just means ‘don’t be afraid’ and I found something very beautiful about that. Obviously the fact that they used to converse in Latin is incredible to me. The fact that he texted his wife that before he left the world is very tragic and very beautiful.”

As for his favourite Heaney poem?

“One of my all-time favourites is St Kevin and the Blackbird, which is very beautiful and very dark,” he said. “St Kevin’s hermitage [in Glendalough] is near me. It’s a lovely story and the poem is devastating.”