All Together Now festival line-up revealed

The festival, which was the brainchild of John Reynolds, will take place in Co Waterford over the August bank holiday weekend 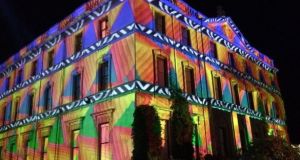 Punk poet Patti Smith and Damon Albarn’s The Good, The Bad & The Queen have been announced as headliners for the All Together Now music festival. They join The National, who have already been unveiled as one of the big names playing the Curraghmore Estate, Co Waterford, event as it returns for a second year over the August Bank Holiday weekend. The line-up will also include Father John Misty, Jon Hopkins and Hot Chip, it has been revealed

It promises to be an emotive weekend for the fledgling festival. All Together Now was the brainchild of John Reynolds, the Irish promoter behind the Pod nightclub and Electric Picnic and Forbidden Fruit festivals. He died suddenly last October, just a few months after All Together Now had staged its successful debut, featuring Roisin Murphy, Fleet Foxes and Underworld .

The National are one of the biggest cult acts in the world and it was seen as a coup for ATN to secure them for their only Irish festival performance of the summer. Patti Smith was last in Ireland as support to Nick Cave at Royal Hospital Kilmainham in 2018 and will be regarded as ticking the “heritage” box for the festival.

Most intriguing of all, perhaps, is Albarn’s Good the Bad & the Queen. Albarn is best known as the creative voice behind Blur and Gorillaz. The Good the Bad & the Queen is a more avant-garde side project, featuring Paul Simonon of The Clash, Simon Tong from The Verve and veteran afrobeat drummer Tony Allen. Their recent second album, Merrie Land, is a withering psychoanalysis of Brexit Britain and songs such as The Last Man to Leave and the Poison Tree should make for interesting listening once the Article 50 dust has settled.

Reynolds had established the template for a different kind of music festival with Electric Picnic 2004. The emphasis was on art and communal spirit as much as on music. However, he fell out with the festival’s new majority shareholders, Festival Republic, against whom he eventually settled a legal case.

Electric Picnic has gone on to establish itself as Ireland’s biggest music festival and this year raises its capacity by 2,500 to 57,000 – a far-cry from the 10,000 who attended Reynolds original “boutique” event in 2004.

With All Together Now Reynolds was seen as returning to his more eclectic roots. The 2018 event was deemed a success and to have carved a unique space in the calendar, with such attractions as a steampunk “afterburner” that shot flames into the sky, a Lawns of Tranquility “wellness area” and a spoken word All Curious Minds zone.

This year will be perceived as further evidence that, notwithstanding the tragic loss of its founder, that ATN is set to become a force in Irish live music There will be 16 stages, encompassing music, theatre,spoken word and comedy. Further acts will be unveiled in the months ahead but already this is shaping up as a fitting tribute to Reynolds. Tickets are on sale now, with weekend passes at € 208.