All Tvvins at the National Stadium: everything you need to know

The dynamic duo’s second album marks a crucial advance. Catch them before they tour 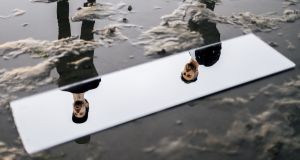 All Tvvins: now with fewer tricks and effects

All Tvvins aren’t the first successful indie Irish group formed out of the ashes of other acts, but they are one of the most admired. Way back when, in their respective bands Adebisi Shank and the Cast of Cheers, Lar Kaye and Conor Adams were doing all they could to harness the often combustible blend of art and ambition.

Adebisi Shank were instrumental math-rockers who found furious favour with a select fanbase; Cast of Cheers, meanwhile, were trapped in a Foals/Bloc Party corner. There seemed little enough reason to continue, as each band gradually came to realise – like so many before them – that in order to go forward they had to stop, rethink, tear up the rulebook and start again. And so Kaye and Adams formed All Tvvins, a textbook example of what can happen when you let go of what was holding you back. What is really interesting, however, is how the resultant music differed form their previous bands – there were no odd time signatures or guitar riffs that thudded through your head, but rather eloquent songwriting shifts and delicate flurries of melodies. There was something else, however, that set All Tvvins apart: an innately dynamic approach to their music that worked not only in a live setting but also on record.

This was apparent from their 2016 debut album, IIVV, when this paper’s reviewer referred to its “danceable pop-rock … zig-zagging synth riffs … clubby ambience … All Tvvins tick several boxes at once without sacrificing any of their credibility or compromising on their indie ideals. Put simply, this is feelgood music at its best.” Fast-forward to this week, and their new album, Just to Exist, manages the not inconsiderable feat (writes this paper’s reviewer) of “crafting a fully realised tune that’s catchy enough to get radio play but interesting enough to posit them as an alternative act”.

That All Tvvins have stepped positively aside from their major label debut to releasing their follow-up on an Irish indie label (Faction Records) says something about their resilience and self-belief. There was also a change in musical approach. While IIVV was fashioned by a network of five producers (who had previously worked with the likes of Arctic Monkeys, George Ezra, The Vaccines, Queens of the Stone Age and Kylie), Just to Exist was overseen by Adams, Kaye, and James Vincent McMorrow, who also shares songwriting credits.

Between the three musicians, a new approach to songwriting emerged: fewer tricks and effects, more instincts and the creation of sections of music that, the band says, were “too manic to use but too intriguing to ignore”. The result is a crucial advance in the band’s sound – it remains as widescreen as it has always been, yet there are strings pulling it tightly together.

Next month All Tvvins embark on a headline UK and European tour, and then it’s back to Ireland for summer festival gigs. In the meantime there is this highly anticipated show. Interestingly, for the first time in years, the venue has a standing area at the front of the stage. Prepare to duck, dive and sweat.