‘The artist needs to know there isn’t just one path. It’s not just: do a Hozier’ 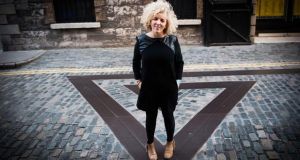 Angela Dorgan has been called the fairy godmother of Irish music on more than one occasion. As the head of First Music Contact for more than 20 years, Dorgan is at the coalface of the the industry, helping new bands develop at key stages in their careers. First Music Contact offers band consultancies, and promotion via the online platform Breaking Tunes, as well as facilitating appearances at international festivals such as SXSW, Eurosonic and Mondo NYC.

At home, the First Music Contact-run festival Hard Working Class Heroes brings international and local industry to bands in a weekend of gigs around Dublin city. The 16th edition takes place in five venues from Thursday to Saturday, September 28th-30th. Dorgan and the team took the opportunity to update the festival’s gig and conference offerings; mainly reducing the number of bands from 100 to 50, with the application process having extra emphasis on bands’ plan for the coming year and what they want to get out of playing the festival. Hard Working Class Heroes isn’t just another gig, it’s an opportunity to develop a career, if the artists are willing to engage.

The decision to reduce to 50 artists allows First Music Contact to deliver a more impactful and consultancy-based approach for selected artists through mentorships, meetings with bookers, managers, Spotify editors and sync agents.

Hard Working Class Heroes’ reconfiguration ties in with the increased international recognition of Irish artists on multiple tiers on a global stage in recent years thanks to the likes of Picture This, Lisa Hannigan, Le Galaxie, Chasing Abbey, James Vincent McMorrow, Hare Squead and Gavin James.

“The artist needs to know that there isn’t just one path,” says Dorgan. “It’s not just ‘do a Hozier’. And it’s not just ‘do a U2’. There are so many levels to a career. There are so few bands doing stadiums now, but there could be 10 territories where you go out and play and fill venues. So our job is to help artists identify those multiple territories and to be the bowl that throws their pasta at the wall to see if it sticks. If it does, brilliant. If it doesn’t? ‘These guys want to bring you to the States. Here is the funding to go there.’ Bands don’t need help writing good songs.”

Impact in the culture

Despite the focus on exporting Irish music, Dorgan is keen to do more for Irish artists in Ireland.

“An Irish artist will always be an Irish artist, so they are worth your time, investment, love and support, because they’re not going to take the shirt factory or the IT business out of Dublin. They’re always going to be Irish. So no matter how successful they get, if we’re claiming them, we should have at least had something to do with their chance in getting there.”

First Music Contact received €102,000 this year from the Arts Council with supplemental financial support from Culture Ireland to pay for international delegates and trips for artists at festivals. The difference in the level of funding with First Music Contact compared with similar organisations in other sectors of the music industry, such as contemporary and classical music, suggests that music of pop and rock origins with commercial appeal is always at the bottom of the rung, even though it has more impact in the culture.

“We’re an organisation that supports and helps a maker develop their ideas and sometimes moves into commerce,” Dorgan observes. “But when it does, we’re the organisation that makes it easier for you to make the transition from artist to commercial. That’s a viable thing to invest in.”

It’s a frustrating delineation that leads to difficulties in the sector plain to those who are in it, but invisible to those outside. Dorgan says that First Music Contact can’t afford to wait around for things to happen.

“We’re an organisation that doesn’t ask for permission,” she says of funding issues. “We have to find the money because every time I look at Breaking Tunes there’s more bands on it. Our consultancies are full for 2017 and we’re planning for January. In real terms we’ve no idea if we’ll be here in January. But I know that there are 14,000-and-counting bands who want to get as far as they decide to get. Where they go with it is up to them. What we can do is we can open a door that individuals can’t do on their own.”

First Music Contact is operating with the strategic plan that it will still be around helping artists when and if Hard Working Class Heroes gets to its 30th year. Dorgan will continue to advocate for the artists and the opportunities needed to help them change gear in their careers.

“It’s money for an infrastructure. It’s for the future. It’s for your son or daughter to pick up a guitar and have a viable career, so you won’t faint when they come into the kitchen and say ‘I’m in a band’. It’s about being in a country where the leader is telling everybody how important art and art-making is, so you back it up and you support it. We should all want it.”

Ireland’s industrial heritage: the past you might not know we had
9