How Music Works: It took Ray Blackwell time to understand the importance of his family’s venue 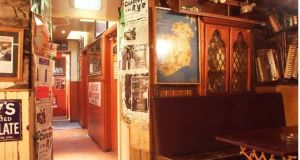 Inside De Barra’s, the folk club in Clonakilty. Photograph: debarra.ie

As the keeper of the flame at De Barra’s, the folk club in Clonakilty, west Cork, that is known for its associations with artists such as Noel Redding (The Jimi Hendrix Experience), Donovan and Roy Harper, Ray Blackwell knows a lot about music legacy.

But it’s legacy of the family kind that defines De Barra’s, too. Blackwell’s family has owned the bar and venue for three generations. It was reopened by his parents, Bobby Blackwell and Eileen Barry, in the early 1980s. Now in charge of the establishment, Ray is aware of how rare it is to have a bar, never mind a venue, kept in the family.

“There’s not many third-generation family-run businesses, full stop,” he says. “The third generation is the generation where it all kinda falls apart and you can see that in the number of family-run bars dwindling across the whole country.”

He has lived in the bar his whole life, along with his three siblings, and remembers his dad keeping him busy by making him turn the bottles on the shelf label-side out. He reckons a family-run business has a different vibe.

“It’s a work ethic. I feel if you go to any family business, you can witness something different: an extra attention to detail, something special that’s really tangible.”

As a typical teenager, Blackwell hated working in the bar, but by osmosis he picked up a love of the folk artists who played there despite being a big Nirvana fan at the time.

“I really got to appreciate their music under duress,” he chuckles. “It was interesting for me working and hearing all these guys saying, ‘It’s great to be in De Barra’s’. And when you’re younger you’re thinking, I’m here every day – what are you talking about?”

In the deep end

Now older, wiser and in charge, Ray understands the venue’s importance and its lineage. The annual Clonakilty International Guitar Festival, which is now in its 13th year, is adding to the legacy of the venue and the town. He was thrown in at the deep end by his father at the beginning.

“It was never my intention to end up working in De Barra’s. I had been living abroad in 2005 and I had to to come home. I wasn’t really engaging with where I was and he kind of grabbed me and said, ‘Look, we’re going to do this and I want you to be involved.’ ”

This year’s programme for the festival, which takes place September 20th-24th, features the six-string instrument as its theme, takes in Dublin rockers Otherkin, singer-songwriter Wallis Bird, the trad-folk of Lankum (formerly Lynched), the gothic Americana of Slim Cessna’s Auto Club and English garage-punk duo The Lovely Eggs among others.

The deviation from De Barra’s core folk offerings is explained by the Louis Armstrong quote: ‘All music is folk music. I ain’t never heard a horse sing a song.’

“That’s kind of my mantra,” Ray says. “I do believe all music is folk music; they’re all just stories to some extent.”

The Guitar Festival is run as a voluntary nonprofit, and 85 per cent of the shows are free. It receives funding from local and national councils, a few sponsors and it was recently awarded the EFFE label by the European Festival Association, which recognises festivals of quality that are committed to artists and the local community. One of the trails will take in a butcher shop, a health food store, a music shop, the parish hall and the street itself.

“The town is our canvas,” Blackwell says. “We want people to spend money in town, whether its buying an ice cream, a pair of shoes, booking into a hotel – so everyone gets a lick of the lollipop.”

Clonakilty is part of a musical resurgence in west Cork, with the three venues of De Barra’s, Connolly’s in Leap and Levis in Ballydehob being described as “the golden triangle” by musicians who tour there.

Clonakilty has a bohemian vibe and a landscape of beaches, woods and hills. “I always think of it as a pocket of resistance,” Blackwell says. “So many musicians have moved here, whether it was after reading Noel Redding’s book or they played a gig here once and ended up staying. Leonard Cohen said ‘Pebbles in a bag polish each other’, and that applies to Clonakilty. It feels like it’s growing here. It feels like we’re on a rising wave. The Guitar Festival is part of that.”