The 8 best new Irish songs of the week 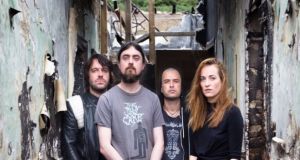 Built on a twisted vocal sample with a clear Dublin accent, the local boy Dermot Kennedy fuses a singer-songwriter sensibility with modern production techniques to create a sound that is at once reaching and intimate. Kennedy is working with an international team already so it seems likely we’ll be hearing much more from him.

Balbriggan’s finest continues her ascension with a new single that has a dancehall R&B vibe and shuns an ex as she’s “got too much style for your foolish antics.” Yup.

3. Anderson - Makes Me Feel For You

Daniel Anderson has quietly followed up his excellent 2015 album Patterns with this lush ballad with psychedelic tendencies. It works as a beautiful apology and song.

4. Lankum - What Will We Do When We Have No Money

The young trad-folk Dublin group recently signed to Rough Trade and will release their second album Between The Earth And The Sky on October 27th. The album’s first song is a folk number first sung by Elizabeth Cronin in 1954 in a slightly different form and the band turned it into a droning ballad.

The under-rated and underpromoted Galway duo of Mike Small and Matteo Grassi released a new EP earlier this month and the highlight is the shimmering synth-electronica title track featuring the vocals of one Rokaia. All three tracks are worthy of the €3 asking price.

Dublin-based songwriter, producer and multi-instrumentalist dropped this song of bright and sweet indie-pop proportions with a whistle solo and a bounce most artists couldn’t get close to replicating.

The Dublin indie-rock band gear up to their slot at New York showcase festival Mondo NYC (the new CMJ) with a new single that has a bit of an Interpol-style bite to it. Props too to the stylish Alan McCarthy-directed video featuring dancer Alicia Premkumar.

Not strictly a new artist but Math Man is a Dublin producer who has only recently been making a name for himself as well as others. Having established himself as the producer behind the rap collective The Animators, he has gone on to produce his fellow Animator Mango, providing the Dublin rapper with grime-heavy beats to rap over on tracks like Badman and What Are You Sayin. For his solo Bangers 4 Ca$h, which follows an EP that featured a collaboration with Hypnotic Brass Ensemble, Math Man turns in a collection of grime-inspired club beats that stand on their own.

The best artworks to see in Ireland’s reopened galleries
9