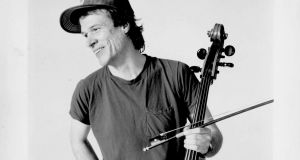 Arthur Russell: ”The innate melancholia at the heart of much of his work was something he felt from the start”

Arthur Russell was born into a farm in the charmingly titled Oskalooska in Iowa in 1951. He didn’t harbour much love for working in the fields but from a young age he showed a tremendous feeling for music and as a child and adolescent studied cello and piano. The innate melancholia at the heart of much of his work was something he felt from the start. He was a lonely child and a fish out of water in Iowa. His homosexuality was a source of isolation in a place he considered several planets removed from the centre of civilisation.

Once he moved to San Francisco at the age of 18, he rarely returned to Iowa. The themes of his songs hardly ever looked backwards or delved into the past. He wrote pop songs for the moment and composed futuristic dance music that fitted perfectly into the worlds of his imagination.

In San Francisco, his actual world expanded exponentially. He lived in a Buddhist commune and studied North Indian Classsical music at the Ali Akbar College of Music and western composition at the San Francisco Conservatory of Music. From having felt stuck in a rut in Oskalooska to meeting Allen GInsberg and accompanying him on cello at his readings, Russell’s transformation was swift and dramatic.

He relocated to New York in 1973 to further his studies and expand his burgeoning world. Through a chance encounter he became music director at The Kitchen, an avant-garde downtown performance space. It was the bastion of minimalism in the city but Russell’s outlook paid no heed to generic barriers and illicited much controversy by booking bands like The Modern Lovers and Talking Heads.

His own musical experimentation at this time was centred largely around a band called The Flying Hearts. It wasn’t until he paid a visit to Nicky Siano’s disco club in Soho in 1976 that the mirrorball dropped and a whole new world of dance music exploded.

It precipitated a brand new modus operandi on Russell’s part. He began working solo at a furious pace, often turning over several songs in a single day. New technology enabled him to be his own orchestra with primitive drum machines replacing the need for a drummer. For a multi-instrumentalist it was like reaching Shangri-La.

The problem he had with finishing his work has meant that he left behind a treasure-trove of material in all the different styles he turned his hand to. Russell managed to span the gamut of musical modes in a decade and a half. Most of this material dates from the mid-1980s when he was making a concerted effort to distill his experimentation into something approaching more tangible material.

So they’re songs basically but not as you’ve ever heard them before. His ability to imbue each one with a personality of its own turn them into something else. Some work better than others but they all have character in abundance. His collaboration with Jennifer Warnes, That’s Us/The Wild Combination, is a richly nuanced classic. The charts never listed an Arthur Russell song.

While he reached for the skies and brought back the stardust, they remained a poorer place.