Sharon Carty, Celine Byrne and Danielle de Niese are all performing in Ireland this week 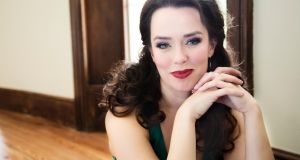 It’s an all-Irish cast for Irish National Opera’s new production at the Town Hall Theatre in Galway of one of the great 18th-century landmark operas, Gluck’s Orfeo ed Euridice. Mezzo-soprano Sharon Carty stars as Orfeo with sopranos Sharon Power as Euridice and Emma Nash as Amore. It’s a co-production with Emma Martin’s company United Fall and Martin herself is involved, directing her first opera and also taking responsibility for choreography. Peter Whelan conducts the Irish Baroque Orchestra and the designs are by Sabine Dargent (sets) and Catherine Fay (costumes).

If you want to catch soprano Celine Byrne in opera this year you’ll have to travel to Minnesota, where she’s in Puccini’s La rondine in October, or to Kassel in Germany, where she starts an extended run in the title role of Puccini’s Madama Butterfly on December 8th. But before that you can hear her closer to home in the altogether greater intimacy of the Church of Ireland in Boyle, where she is the major classical presence during this year’s Boyle Arts Festival. She will be partnered by Ailbhe McDonagh on piano and cello and Lynda O’Connor on violin.

One of Decca’s star sopranos, Australian-born American Danielle de Niese has been closely aligned with the RTÉ Concert Orchestra since she made her Irish debut back in 2012. But now that the RTÉCO’s long-time manager, Anthony Long, has been transferred to the RTÉ National Symphony Orchestra, interest in the singer seems to have tranferred with him. De Niese makes her NSO debut with conductor Neil Thomson in an opera gala that will survey French romantic repertoire including Gounod, Massenet, Franck, Duparc, Delibes and Bizet, with an Italian look-in from Rossini for Una voce poco fa from The Barber of Seville.