The singer, who performs ‘Fernando’ for the film sequel, says she took on Abba classics ‘in a different way’ 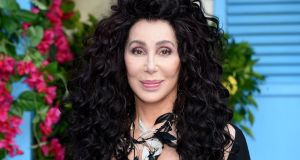 Cher on the red carpet for the world premiere of the film Mamma Mia! Here We Go Again in London on Monday. Photograph: AFP/Getty Images

Speaking to the Today Show in the US, the 72-year-old singer said: “After I did Fernando [in the film], I thought it would be fun to do an album of Abba songs, so I did! It’s not what you think of when you think Abba, because I did it in a different way.” No more details are yet available about the project.

Eyebrows were raised at the news that Cher was cast in the Mamma Mia! sequel as the mother of the character played by Meryl Streep, who is just three years Cher’s junior. Cher performs Fernando in the film alongside Andy Garcia, who plays hotel manager Fernando Cienfuegos.

Writer-director Ol Parker said that “people brought their husbands, wives, children and dogs” to watch the scene being filmed. Tom Hanks, executive producer on the film, said “we were all in awe, and a bit nervous” of the veteran actor and singer.

Speaking to Sky News at the world premiere in London on Monday night, Cher explained how she got the role: “The head of Universal used to be my agent, and he and I are best friends. He called me up and he said: ‘You’re doing Mamma Mia!’ And he hung up … It was beyond fun. I’ve never been on a movie that had less tension.” She said the film is “fun at a time when we need fun”.

Cher continues to perform live: as well as continuing her concert residencies in Washington DC and Las Vegas throughout 2018, she will tour Australia in the autumn . A jukebox musical of her own work, The Cher Show , premiered in June in Chicago and will transfer to Broadway in November. – Guardian

In a week of tributes to John Hume, a 12-year-old has the biggest impact
7