Autechre: ‘Something happens when you listen to music in the dark’ 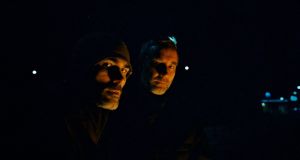 Lights out: Sean Booth and Rob Brown of Autechre

Electronic musicians tend to stage elaborate live shows featuring dazzling lights, eye-popping visuals, and all sorts of bells and whistles. Kraftwerk tour a 3D live presentation nearly half a century since their inception in Dusseldorf, and a performance by the Beatyard-bound Orbital wouldn’t be complete without their trademark head torches. After a career spanning 31 years, Autechre are audaciously taking live electronic music forward, but in an opposite direction, as the duo from Rochdale, greater Manchester, will perform in the National Concert Hall entirely in the dark.

The method to their madness is simply to accentuate the listening experience. “I think something happens when you listen to music either with your eyes closed or in the dark,” says Sean Booth. “The music reaches further into you.”

Listening to tracks in darkness has also informed their working methods. “We often find ourselves listening to tracks back on headphones with our eyes closed, and every event and moment might be more or less poignant than you imagined,” adds Rob Brown. “I think everyone feels similar when their computer is turned off. Your eyes are no longer distracted.”

Today, Autechre have their eyes wide open as they talk via computers – what else – from their respective home studios in Bristol and Manchester. “I’m not a neuroscientist, but all I know is something happens in the dark that I’m desperately trying to explain,” Booth offers.

“When we used to go out before the rave thing kicked off, there used to be a lot of shiny clubs with bright lights and sparkly dresses and all that. The first warehouse party I went to was in about ’88, and it was basically black with no light at all. It was weird. Obviously, the music was really hypnotic and captivating, so something locked you into a zone, and then that zone became three-dimensional and tangible because you experience sound in 3D. It’s not like looking at something on a screen that is a representation of a space; through sound, you’re actually in a space and there is stuff going on. I personally find it much more immersive.”

Autechre have enjoyed hearing, rather than observing, how audiences react. “You can still feel the crowd’s reaction with the lights off,” Booth says. “We get a feeling they might be less aware of us though, especially in America, where they have a much more visual culture. They want showmanship in a Mick Jagger kind of way.

“It took America a long time to get their heads around dance music, about 20 years really. They are still struggling with what happened with dance music in Europe, especially in the ’90s, and we’re definitely part of that. If we did this in America, they’ll probably think, ‘They’re so pretentious’, or whatever. We’re just really into sound. It always seemed such a basic and obvious thing to do.”

Dublin was also a very obvious venue for this project, as they’ve played the capital numerous times over the years and have a long-standing relationship with Paul Timoney of music promoters U:Mack.

“Dublin is mad,” Booth laughs. “My grandad loved Dublin and he used to go over a lot when we was younger. When I went there myself, I immediately realised why. It’s kind of like a giant Rochdale that’s also a capital city.

“There are a lot of familiar things to me about Dublin in terms of attitude and conduct. It feels familiar, which might be just because there is so many Irish in the northwest of England. We also share our climate. We experience a similar thing in Glasgow, but it is not as pronounced. Dublin is a lot more familiar. Everyone seems to work really hard and have a really hyper mindset. It’s a bit like Manchester in that respect. People are smart in Manchester, but really going for it. We didn’t feel like we were really sticking our necks out by playing the National Concert Hall. We knew people would get it and go.”

In addition to being so seminal, Autechre are also one of the most prolific electronic acts of all time. They’ve just released a whopping eight hours of music, The NTS Session 1-4, which they originally broadcast on the digital radio station NTS Live, which is based in London, Los Angeles, Shanghai and Manchester. Hot on the heels of Brian Eno releasing a five-hour long compilation album, Music for Installations, and Max Richter’s eight-hour piece Sleep, Autechre are also having fun with elongated lengths.

“Brian Eno has always been an influence,” Booth says. “He gives you so many different ways at looking at things, in combining instruments, or how a track unfolds. He is never shy to try things out, and we’re a bit similar in that we’re not scared to surprise ourselves. Making mistakes is how you learn things. I only heard about generative music from reading an interview with Eno, where he talked about the concept, and we’d already been doing it to a point because we’re interested in incorporating uncertainty. We don’t do long, drawn-out ambient things, but we made a form of ambient music on the NTS Sessions, which came about after we did a DJ mix for them. They asked us to do a residency but we didn’t fancy putting together eight-hour DJ mixes. We realised we could make something of our own that could last eight hours. It was ambitious, but we gave it a go. We treated it like a Peel Session, just a giant one.”

Indeed, the late John Peel was a committed champion and formative influence on the Rochdale duo. “John Peel pulled me away from hip-hop by playing Meat Beat Manifesto and Renegade Soundwave,” Booth says. “He showed me you could push things in whatever direction you wanted. He died around the same as John Balance from Coil, which was awful. Now there is a real void of tastemakers in general. All the best tunes took the piss a bit. There was always an element that wasn’t supposed to be there. People are scared now. They think you can only make a living if you toe the line, and there is a lot of line-toeing in music.”

Brown and Booth also cite authors such as Lewis Carroll and Roald Dahl as early influences from their childhood. Autechre are now regarded as one of a holy trinity of acts on the Warp Records roster, alongside Aphex Twin and Boards of Canada, who collectively influenced the direction Radiohead took on Kid A, and numerous other artists over the years. However, they don’t take such plaudits or praise particularly seriously.

“It’s very flattering, but we’ve taken from so many sources over the years that I don’t think we’re any more deserving than anyone else for any accolade,” Booth says. “I’m really reverent towards people like Mantronix, Gerald Simpson (A Guy Called Gerald) and Unique 3. There are people much older than us doing things that are far more interesting. We’re just small fry, really. We never had much equipment, so we had to be creative to make sounds. It all started from a frugal approach.”

The minimalist aesthetic of Autechre over the years, from their sleeve artwork to performing in the dark, could perhaps be construed as attempts to de-humanise electronic music. “No, it’s the total opposite,” Booth answers. “We love artificial things. Artificial means man-made and manufactured by humans. There is this notion that electronic music is not human because it is artificial. I think it is intrinsically human. I haven’t seen or heard of any other species who use computers. They are uniquely human things.”

Richard D James, born in Limerick and raised in Cornwall, is a one-man institution of mind-bending electronica, gorgeous and grotesque videos, and fantastic myths. James is reputed to have recorded Come to Daddy in a former bank vault in London with four-foot thick walls, and is rumoured to own a tank and submarine.

Initially Burial remained anonymous, but south Londoner Will Bevan felt forced to reveal his identity after a tabloid newspaper speculated that either Norman Cook or Richard D James created the Mercury Prize-nominated album, Untrue. In a recent essay for Pitchfork, Simon Reynolds claims Untrue as the best electronic album of the 21st century so far.

Arguably the Beatles of electronic music, Kraftwerk returned to these shores for a Cork performance in the Marquee this week. They’ve inspired virtually every single strand of modern music. Coldplay lifted – with permission – the melody of Talk from their 1981 tune Computer Love.

Decades after pioneering trip-hop, Massive Attack are still in a league of their own. Their last release, the Ritual Spirit EP in 2016, was spellbinding. A headline performance at Longitude in 2014, accompanied by powerful visual commentary of the concurrent war in Gaza, is one of the best festival performances ever staged on Irish soil.