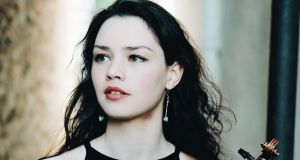 Virtually everything I’ve come across about Galway’s stint as European Capital of Culture next year, has been negative. However, one shining beacon on the horizon is a new festival being created by Music for Galway. Cellissimo is planned as a triennial cello festival, and it will run for the first time between Saturday, April 25th, and Sunday, May 3rd, next year.

Details of the new event are thin on the ground. But the West Cork Chamber Music Festival, which ended on Sunday, could be regarded as a kind of taster in the way it offered a fascinating insight into some less-frequently heard cello repertoire.

The three biggest pieces – the sonatas by Chopin and Alkan, both from the 1840s, and Rita Strohl’s Sonate dramatique (Titus et Bérénice) of 1892 – share a grandeur of ambition. It’s as if each composer had set out to write the cello sonata to end all cello sonatas. The outcome in each case is a work that is seriously overextended but with something of the fascination of an exotic bloom that’s grown so large its stem can no longer fully support it.

The three composers work the performers hard (Johannes Moser and Denes Várjon in the Chopin, Emmanuelle Bertrand and Pascal Amoyel in the others). And though none of the performances quite gave the impression of being able to contain the composers’ elaborate visions, the musical journeys, especially in the almost relentlessly virtuosic Alkan and opera-as-chamber-music world of the Strohl, were full of unexpected vistas.

Strohl is a composer who did not even make it into the last printed edition of the New Grove Dictionary. In today’s more welcoming climate for music by women, you can expect to hear much more of her.

The cello is widely felt to be one of the most warmly romantic instruments, but the 19th century, the homeland of romantic music, is not exactly over-supplied with great cello sonatas, let alone works for solo cello. The West Cork festival’s cello strand also embraced the six suites for solo cello by Bach, the greatest works of their kind.

Emmanuelle Bertrand played them with a tone that was more grainy than sinewy, the sound being typically more doleful than bright, although that should not be taken to suggest that there was any shortage of energy in her delivery. Quite the opposite, in fact. She showed an extraordinary willingness to live dangerously.

Bertrand also took part in one of the festival’s most remarkable performances, of Mozart’s Divertimento in E flat, K563. This divertimento is actually a string trio on a large scale which marries what could be taken as lightness of manner with inescapable expressive depths in a way that’s uniquely Mozartian. Violinist Henning Kraggerud played with flighty imaginative flair. He set himself tongue-twister-like tasks of intricate articulation that somehow seemed quite in place, perhaps because the strength of character from viola-player Ellen Nisbeth and Bertrand proved to be such an anchoring force.

Emma O’Halloran’s Emily Dickinson inspired, 2017 string quartet, Dying is a Wild Night (played by the Quatuor Zaïde) hovers in a kind of in-between world which is imbued with the not-quite flicker and not-quite shimmer of delicate harmonics and experiences intrusions of more solid musical gestures.

There was a punchy performance of Louise Farrenc’s Nonet (led by Keith Pascoe), which quite outclassed the delivery of her Piano Quintet No. 2 (led by Mairéad Hickey). Hickey came into her own in French composer Pierre Thilloy’s theatrically anguished Khojaly 613. The piece is a response to the Armenian massacre of civilians in Kojaly, Azerbaijan, during the Nagorno-Karabakh War in 1992, and Slovenian clarinettist Mate Bekavac brought extra appeal to the performance by adding the haunting ethnic sound of the double-reeded dudok in parts of the work. Hickey later brought an amazing combination of gutsiness and ecstasy to Fazil Say’s Violin Sonata with pianist Alexei Grynyuk.

The festival’s director Francis Humphrys has a fondness for works by or about the oppressed, and much of his commentary in his programme notes is predicated on the idea that composition is a kind of diary in which the vicissitudes of everyday life are minutely detailed. And he is extremely loyal to his causes, one of which is the work of Mieczyslaw Weinberg (1919-96), a Warsaw-born friend of Shostakovich who, although he spent time in a Soviet prison, said, “I cannot say about myself what others say about themselves – that they were persecuted.”

This year’s festival included the Festival Strings under David Brophy in a searing account of the Chamber Symphony No. 4, and the Violin Sonata No. 4 which Marc Danel and Alexei Grynuk delivered with sombre gravity.

Returning German soprano Caroline Melzer gave a wonderfully reserved account with Joseph Middleton of Satie’s Trois Mélodies, songs in which the personality of the performer almost needs to be made invisible for the delicacy and originality Satie’s world to come across.

Irish soprano Anna Devin, again with Middleton, gave a rather overblown late-night account of songs by Duparc, though there were enough moments of well-judged magic to suggest she had simply misjudged the scale of the venue, St Brendan’s Church. Two days later, with Camerata Øresund directed from the violin by Peter Spissky, she was transformed into a devastatingly accurate interpreter of some fiendishly difficult Italian cantatas by Handel, Delirio amoroso and La Lucrezia.