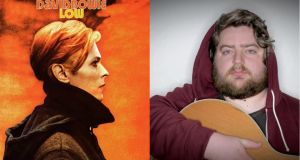 Elephant’s Shane Clarke on David Bowie’s 'Low': 'There seemed to be no rulebook.'

Bowie’s Low (1977) changed everything for me. Though I was familiar with side one of the record for a number of years, it wasn’t until the latter half of my 20s when Low changed from a strange, intriguing concept to probably my favourite album of all time.

Its looseness, structurally speaking, is what began to really draw me to it. Some songs feel more like a moment in time than songs someone sat down and put together with intention. They begin and end, leaving you with an impression of an encounter with some odd character or unearthing a strange desire, rather than just a collection of songs with verses and a choruses, intros and outros. This was true of the more instrumental side two as well. There seemed to be no rulebook and that is what makes it so incredible.

I was already deep into the recording of my first album and this new thing I had fallen in love with was making me question everything I had done up to that point. Simply put, I wanted to make my Low. To put it another way, I wanted to make something that made me feel like Low makes me feel. I hope to some day.

As told to Niall Byrne.

Elephant’s new single Time Will Tell is out now.