Stirring up a choice music mix at the Sugar Club

How Music Works: Mark Murphy of Choice Cuts on how he reinvented the Leeson Street venue as a musical mecca for a new generation of hip-hop, jazz, R&B and soul fans 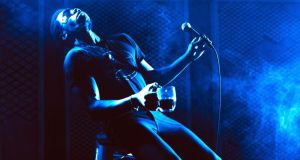 Mark Murphy would previously describe the Sugar Club on Dublin’s Leeson Street as his “spiritual home”, so it came as little surprise when he started running the venue nearly five years ago.

Murphy’s Choice Cuts promotions company had a fine reputation for bringing the best hip-hop acts to Ireland, but running a successful venue is different from running one-off gigs.

When he took over the Sugar Club, it needed a lot of work.

“I didn’t realise how hard it was going to be,” he says of the venue, but the foundations were good. “I became partners with the original owner. The speakers were in really bad shape. It was being given out with no hire fee; people were bringing in their own staff on the promise that the bar was going to do well. It was closed a lot of days of the week so there was no continuity, but there was a good management and team in there. Now, we’re booked every day of the week.”

With experience in putting on niche shows for enthusiastic audiences that weren’t catered for elsewhere, Murphy was able to re-establish the venue as a space for hip-hop, jazz, R&B and soul acts, and to use the largely seated venue for film screenings and talks. Artists who have played there draw heavily on North American music and have included Gregory Porter, Charles Bradley, Doom, Shuggie Otis, Roy Ayers, J Rocc and Thundercat. The jazz and soul is reflected locally with acts like Haiku, Fehdah, Ajo Arkestra and Yankari.

“Everything is one degree away,” says Murphy. “If it’s a Choice Cuts show, they’re all my record collection – that’s my rule. We’ve got MCD and Aiken booking shows in there, all kinds of talks and the cinema screenings are doing really well.”

Murphy books the acts based on his gut feeling of what will do well for his audience, as opposed to any demographic decision-making. “I trust my taste in music. I still buy as many records as I did when I was a kid. I’ve been burned a lot so I know what doesn’t work. When you lose money, you stupidly do it again or you learn your lesson. I’ve learned a lot of lessons.”

The venue’s reinvention happened at the same time as a younger generation were discovering new voices in jazz, such as Snarky Puppy, Vulfpeck and Cory Henry, acts that attract a muso audience.

“Eighty per cent of the audience are musicians,” Murphy says of those shows. “They could be failed ones, working, or just total music freaks. It’s a movement around the world that we happen to be at the front of it. I’ve been connecting those dots for 20 years.”

Success with new acts means that sometimes bigger promoters will try to take over when things get bigger. “I’ve had friends who’ve said, ‘it’s great you’ve built up these acts and the bigger promoters take them off you,’” he laughs. “I don’t see it that way. It’s like I’m a happy sap buying the cassette tape and they’re the ones dubbing it off me. You can’t be emotional about it, though.”

Murphy was one of the first to recognise the potential in New Orleans act Hypnotic Brass Ensemble, who found a very receptive audience in Ireland in recent years. Murphy went went on to manage the band until the Sugar Club preoccupied his time, but it helped that those Irish shows were a huge success.

“The Irish crowd always wins,” Murphy grins. “The band hung out for a day here and they realised I’m trustworthy, I’m passionate about the music and I understand about booking, touring and management. I can honour my agreements and I’ve a good network of people that have worked with me for years.”

As a promoter and music lover, Murphy cares about the small shows as much as the sold-out ones and will always be pushing for new acts to be seen.

“I can sell out a Vicar Street gig in 10 minutes without advertising or I can spend 60 hours and put a grand on advertising a gig that breaks even. Which is the successful gig? The businessman says it’s obviously the one you made money and spent little time on, but there are gigs that I want people to see, so you’re always split.”

“Damon Albarn, Flea, Tony Allen, Hypnotic Brass, Theo Parrish and a line-up of 25-plus musicians over two nights. It was a huge booking for us and a big production. The shows were stellar and it was our 10th year so I was very proud.”

“Blue-eyed soul at its best. Joe Dart is quite possibly the funkiest bass player in the world right now. Big things for these guys lie ahead.”

“Our generation’s Nat King Cole. He performed for me twice in one night (something he said he would not do again), and both shows were so special and intimate. Everyone knew he was about to blow up and he did right after.”

Don’t dip your pen in someone else’s blood: writers and ‘the other’
5

Mary Trump: How my family created the world’s most dangerous man
7