The best classical music and opera this week 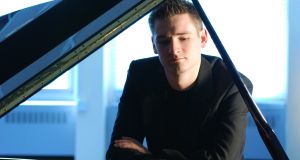 City of London Sinfonia/Michael Collins
NCH, Dublin. 8pm, €25-€49.50. nch.ie
It’s rather unusual for a visiting orchestra in the National Concert Hall’s International Concert Series to feature an Irish soloist. Belfast pianist Michael McHale has a long-standing musical partnership with clarinettist and conductor Michael Collins and he features as the soloist in Schumann’s Piano Concerto in Collins’s concert with the City of London Sinfonia. The other works on the programme are also established 19th-century favourites, Mendelssohn’s Hebrides Overture and Brahms’s Second Symphony. Collins also conducts the orchestras Crash, Bang, Wallop concert at 12.30pm on Sunday, a children’s concert with crafts and other fun activities in the NCH foyer from 11.30am.

France’s Quatuor Voce begin their nine-stop Music Network tour at Warrenpoint Town Hall in Co Down. The tour will include two world premieres. French-Argentinian composer Gabriel Sivak’s Suite Capoeira will be heard only in Warrenpoint. Irish composer Rhona Clarke’s Edge (her String Quartet No. 3) gets its first airing in Letterkenny on Friday 17th. All of the concerts on the tour will include Bartók’s First Quartet, Schubert’s Quartet in C minor, D703, and Beethoven’s Quartet in F, Op 59 No 3. Clarke herself will give a Composer’s Voice talk courtesy of the Contemporary Music Centre at the concert in Tralee on Friday 24th.

Così fan tutte
Grand Opera House, Belfast, 7.30pm, £25-£47.75. goh.co.uk , until Sun; also Thurs, Millennium, Forum, Derry. 8pm, £19.50-£32.50. millenniumforum.co.uk
Northern Ireland Opera’s new production of Mozart’s Così fan tutte has been updated by director Adele Thomas and designer Hannah Clark to the Roaring Twenties. The two couples are sung by Kiandra Howarth and Samuel Dale Johnson (Fiordiligi and Guglielmo) and Heather Lowe and  Sam Furness (Dorabella and Ferrando), with John Molloy as the maker of the bet which sets the testing of the two girls’ fidelity in motion, and Aoife Miskelly as the maid Despina. The Ulster Orchestra is conducted by Nicholas Chalmers and the performances are in Italian with English surtitles.