Space Dimension Controller: ‘I can get really silly in my DJ sets’

How Music Works: Electronic producer Jack Hammill has been known to drop music from ‘Star Wars’ into his DJ set, but his own tunes have a wider cinematic scope 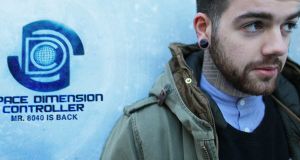 Space Dimension Controller aka Jack Hamill: “I loved Escape from New York and other John Carpenter films when I was a kid”

As Space Dimension Controller, Jack Hamill has cultivated a style of electronic music that is indebted to synth-led cinema scores, the electro-funk rap of Egyptian Lover, the avant-dance of Aphex Twin and the ambient electronic haze of Boards of Canada.

Taking his artist name from a synthesiser, the Belfast-based Hamill conceptualised a character called Mr 8040, a heartbroken sci-fi buccaneer whose time-travelling intergalactic adventures were the framework for 2013’s full-length album Welcome To Mikrosektor-50.

Released on the respected and recently revived Belgian electronic label R&S Records, the album, concept and style of his productions helped Hamill set himself apart from other producers and DJs.

“I loved Escape from New York and other John Carpenter films when I was a kid. I never intended on making electronic music until I was about 15 and I really got into Brian Eno, Boards of Canada and Aphex [Twin].”

An exploration of experimental music and techno followed and it all seeped into the Space Dimension Controller sound, as heard on recent single Exostack, which has the ingredients of techno, delicate ambient music and electro. Hamill says he never knows what comes next.

“I just finished a track that ended up nearly 14 minutes long and it’s kind of a one-off spacey disco thing,” he says.

Hamill’s love for narrative-driven cinematic soundscapes has not translated to working on soundtracks himself, but it’s something he’d like to explore. It’s regular live or DJ sets that help him sustain his career, but he cheerily admits he doesn’t quite know how he managed to make Space Dimension Controller his main gig.

“ I never intended on doing this as a career and still have no idea how I’ve pulled it off,” he says when asked if he could offer advice to others looking to make electronic music a career. “No one should listen to me – I f***ed it up for too long a period to be taken seriously.”

That period may refer to the time in his career around 2012 where he fell into the trappings of a touring lifestyle and “just went off the rails completely”.

Hamill began to drink a lot to get over a fear of flying, and drugs soon became part of his consumption.

“I didn’t realise how much I was f***ing up my head,” Hamill recalls. “I gradually developed pretty serious anxiety and depression and I had no idea because I was spending the guts of £1,000 a week on booze and other things for two or three years, so I was pretty unaware of most things.

“I alienated some old friends, family and did a lot of stupid shit that really just built up in my head until I finally burst and got on some anti-anxiety/depression meds which just made me feel even more off my face.”

When he met his partner Rachel last year, the fog began to lift and he says his mental wellbeing became stable.

“That’s not to say I don’t enjoy a drink at gigs, but it’s no longer getting pissed every day and night of the week,” Hamill explains. “These days it would be the thought of Rachel and our two stupid cats that keep me sane or when she comes with me on the road for a gig or two.”

Whether you call it sci-fi geekiness or a healthy streak of not caring what other people think, Hamill boldly goes where few dare and that applies to his DJ sets too.

“I have no shame and no musical taste whatsoever,” Hamill laughs when asked about his boundless DJ sets that have seen him drop the Star Wars cantina song at Dekmantel or a hyper-fast rave track by Ayla at Belfast’s AVA Festival.

“I can get really silly in my DJ sets but I can hate myself the next day,” Hamill admits. “I try to keep it as serious as I can in the studio; but it’s DJ sets that I have my fun.”

The rave track (DJ Taucher remix of Ayla’s Ayla) that caused a ruckus in Belfast can be seen via Boiler Room recording of the set. The fizzy early ’90s rave notes of the song met with a palpable release of elation felt even through a YouTube window. In fact, the Boiler Room Belfast AVA sets themselves have opened a window on the Northern Irish dance scene with the likes of Bicep, Timmy Stewart, Jordan and Or:La gaining international recognition. Hamill, for his part, is encouraged by these local movements but, ever the outlier, suggests he is uncomfortable representing his birthplace.

“My tunes are set in space and Northern Ireland is about as uncosmic as you can get.”

Space Dimension Controller plays Back to Back with Axel Boman at The Pygmalion, Dublin on Saturday August 26th.

Children of the Troubles: They took a child off the road, put a hood over his head and killed him
7