U.S. country singer Glen Campbell died on August 8th at the age of 81. The singer, famous for hits like 'Rhinestone Cowboy' and 'Wichita Lineman,' had been suffering from Alzheimer's Disease for several years. Video: PBS/E!/Vevo 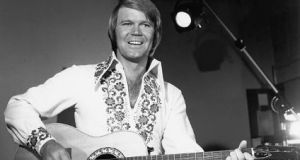 US country singer Glen Campbell has died at the age of 81, his publicist said.

The singer, famous for hits including Rhinestone Cowboy and Wichita Lineman, had been suffering from Alzheimer’s Disease for several years.

His publicist Sanford Brokaw said he died on Tuesday in Nashville at an Alzheimer’s facility surrounded by his family.

A family statement said: “It is with the heaviest of hearts that we announce the passing of our beloved husband, father, grandfather, and legendary singer and guitarist, Glen Travis Campbell, at the age of 81, following his long and courageous battle with Alzheimer’s Disease.

Our Bodies, Their Battlefield: How rape is used as a weapon of war
9