The 10 best new Irish tracks of the week

Plus release of the week from Seamus O'Muineachain & introducing Chirpy 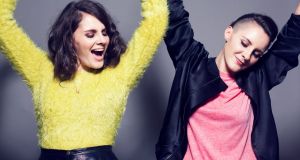 The Heathers: The twins’ newest song has a vocal maturity that has them sounding a bit Kate Bush for the first time in their career

It’s been a fascinating journey for Ellie and Louise McNamara in their career thus far. They’ve gone from acoustic pop to sophisticated songwriting with a big sheen and have written for Disney along the way. The twins’ newest song has a vocal maturity that has them sounding a bit Kate Bush for the first time in their career. Midnight Train almost has a Celtic mysticism slant to it that could easily suit a sweeping Irish landscape vista. Minus points for the factual inaccuracy of midnight trains not applying to Ireland, there’s no way Irish Rail will let that happen because it’d be pure madness.

They started out as a band called Bagels and have grown a lot sonically since appearing on the scene. Now with an average age of 19, their new single draws a through line to the post-rock scene that came before them with production by Vinny McCreith (Adebisi Shank / The Vinny Club) adding some electro-rock heft to an exciting step forward.

Last month Nielsen (the company who track sales in the US) announced that hip-hop/R&B has surpassed rock in the popularity stakes which was news to absolutely nobody who listens to music in the modern era. It’s no different in Ireland, where rap artists completely outnumbers those with the traditional four-piece guitar rock setup. It also means that keeping an ear to what’s going on in Irish rap is hard enough but one name which re-appears regularly is Rebel Phoenix, whose newest track is one which stands out from the crowd.

The Cork electronic artist Bantum already had the talents of soul singer Senita, Limerick and Clare rappers Rusangano Family on the same track on the original track on his Move LP from last year but here the Clare electro-pop artist Daithí adds another spin and in the process, you’ve got four of Ireland’s brightest shining.

The title serves as a mission statement for the song itself, which barely lasts over 90s seconds, so the Bouts member doesn’t muck about in providing a succint guitar pop track that you’ll want to repeat because of its length and its catchy nature.

Ciaran Lavery - Everything Is Made To Last

The Antrim singer-songwriter has followed up his recent live album from Belfast and his debut album Let Bad In with a song that is brushed with intention and poise with Lavery singing “I wanna be alive and a part of the dream.” If he’s referring to his music career, the 100k+ Spotify streams of this song in less than a week suggests he’s connecting, at the very least.

away from the delicate singer-songwriter style that defined his debut material, Dundalk man Shane Clarke has been embracing a more layered sound of late, and it seems Bowie is an inspiration on the starry-eyed celestial rock of this newly-debuted track.

The Tralee singer-songwriter follows up her debut EP with a song that a smouldering track that warns about old flames burning bright.

The Wexford duo with a penchant for soft-focus dreamy indie pop just released their second album this month Aglow & Spark and this lead single has a hypnagogic quality to it.

EXILES x Nina - One Of Us vs. Autopilot

It’s tough out there to get the attention of even music-hungry enthusiasts so a band who uses another artist’s more well-known track to get attention isn’t going away any time soon. So kudos then to Carlow/Kilkenny electronic synth trio Exiles for mashing up their own song with London artist Nina’s electro-pop viral hit One Of Us.

The new Dublin singer-songwriter with the sprightly name arrived last month with a debut EP featuring six sparse songs of pop and folk harmony-laden music. Rebecca Shannon has previously performed with Anuna and as such there’s a choral Celtic touch to her new project. The EP was bookended with a remix of Nowhere Land that adds modern textures to her sound. One to watch.

NEW RELEASE OF THE WEEK

Intended as “a meditation on the simpler side of life,” Seamus O'Muineachain’s second album draws from the West, Belmullet in Mayo to be exact, to produce an album of quiet piano neo-classical compositions that is tranquil and escapist. https://seamusomuineachain.bandcamp.com/