Sound of young Ireland: how rap and hip-hop conquered a generation 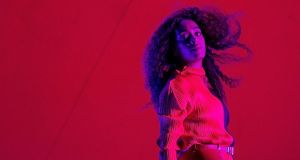 Solange, who headlines Longitude on Sunday, is one act not to miss. Photograph: Rick Kern/WireImage

“Roll up, roll up, come gather round ye poor young chuckleheads and let me spin you a tale from the long, long ago. Have you all heard of guitars? Stringed instruments? We ground them all into dust. Banished them, mate. That’s right, it was the extremely cursed year twenty hundred and eighteen and guitars were excommunicated from Ireland to the sound of a Metro Boomin beat. Twas like St Patrick and the snakes – but with a soundtrack that banged five times as hard.”

This glimpse of your future grandkids being tutored on music history is, of course, me being facetious. But so much has been made of recent Irish festival line-ups moving away from rock music and towards rap flows and digital grooves, it feels like we’re witnessing a cultural tectonic plate shift.

Longitude 2018 at Marlay Park, Dublin, boasts a full clip of acts – Solange, J Cole, Travis Scott, Tyler the Creator, Migos, Post Malone and Diplo to name just a few – that form the most pronounced example of how festival rosters have mutated. The weekend will feature soul, hip-hop and R&B artists across just about every key time slot. As a reward to organisers, ticket sales were strong upon the line-up announcement last February. Later this summer will also see Kendrick Lamar, Massive Attack and N*E*R*D headline Electric Picnic, ensuring all banjos will continue to gather dust.

The ascendency of rap and electronic music acts to the top of festival bills always sparks some sniping from two opposing sides. There’s the kind of traditionalists who like their summer nights scored by the sound of an electric guitar and those who see today’s musical ingenuity in other places. Rock music can work beautifully in the setting – and there’s a sizeable number of people who would be perfectly happy if every festival was headlined by the likes of The Killers and Kasabian – but really they’re the 2018 edition of Homer Simpson, desperately clutching an album by some heritage act or other in front of an oldies shelf.

Whatever your own individual taste, it’s important to recognise that this musical shift is not arbitrary. It is, in fact, the result of a perfect little recipe of elements, not least of all a fundamental change to Ireland’s cultural DNA. These shifts almost always manifest themselves first in youth culture and Longitude’s crowd will be young – especially on the Friday, while the overly enthusiastic youngsters are still standing and before the more grown-up ticket holders have freed themselves from their commitments.

Ireland is very different place from when my “school daze” around the turn of the century was soundtracked by the hip-hop beats that would bump and creak through my Sony Walkman. Rap back then was seen as something weird, something other. The old C-90 tapes might as well have been beamed in from another planet. Before Napster corrupted our spirits, accessing new rap involved plotting a course to the shelf at the back of the HMV or the stepping through the portal that was MTV.

There were local bohemian music scenes and radio spots blazed by brave souls. And live shows did exist. At a Nelly gig at the old Point Depot a group of young men unfurled a banner dedicated to Tupac – his rebellious spirit always appealed to a certain corner of the Irish soul.

I remember hanging outside the school gates one day and another kid holding out his Discman like it was a magical amulet. He pressed the small, plastic eject button and, in great ceremony, the top flipped open to reveal what was within. It was a circular disc of pure polycarbonate plastic, like all CDs were. But this one was decorated with a weed symbol on a solid black background – The Chronic, Dr Dre’s 1992 classic. I looked upon it like it was some form of hidden contraband.

Cut to 2018. Catholic Ireland has dissolved in front of our eyes – you don’t have to be a societal scholar to feel the changes. Meanwhile, the country has progressed into a more multicultural arena, with music functioning as a vital form of cultural exchange. Sounds, styles and flavours that once felt to so many like something to be viewed through a plexiglass window can easily be an important ripple of an Irish person’s sense of identity. The festival line-ups have, in essence, begun to reflect the changing DNA of Irish society.

Absolutely vital to this transformation has been recent Irish-made homemade hip-hop. It is not hyperbolic to describe our own local scenes as currently thriving. If you don’t believe me, glance at the Longitude bill. There’s Soulé, Mango & Mathman, Tebi Rex, Rejjie Snow, Sequence, Kojaque, Jafaris and other Irish stars making phenomenal moves. Fan bases are growing by the day. Expect their smoothly bumping sets to be well-attended.

The internet too has played a role, obliterating regional barriers and offering a direct route into alternative music scenes. If you want to absorb the entire catalogue of DJ Screw, it’s there for you right now. Soundcloud rap is one of the genre’s hottest styles, defined not by geographical loyalty but the platform to which it’s posted online. There are clusters of Irish artists that describe themselves as Soundcloud rappers.

It would be exciting – if a little trippy – for me if a more pluralistic Ireland meant that the Vietnamese records spun in our house when I was little had been elevated to the top of the Irish cultural zeitgeist, but no. That rap and soul forms part of Western popular culture’s foundations is undeniable. Hip-hop’s popularity hit a new plateau in 2017 when Forbes reported that for the first time the genre had financially surpassed rock as the most popular music in the United States. Ireland is just one more country that’s been ensnared by the beats, rhymes and life.

Through these forthcoming festivals we are undeniably about to be treated to some of the best music on the planet right now – it’s not difficult to see why Irish people are gravitating towards it. Take soul singer SZA, who plays Longitude on the Sunday. Her graceful sounds and personal writing are easy to engage with: Broken Clocks covers the imbalance between her love and working life, while Love Galore is about the lingering friction between two ex-lovers.

Kendrick Lamar’s compositions have sountracked the fury of protest as anti-black violence across the US began to infect news feeds with too much regularity. For the undoubtedly majority-white Electric Picnic crowd that will never fully comprehend that pain, Kendrick, like Tupac before him, presents a vital examination of the issues. Meanwhile, groups such as Atlanta trap rappers Migos – see them at Longitude too – offer a glitzy, “bad and boujee” hyperreality that young fans can’t turn away from.

And yes, there’s one final ingredient: festival line-ups are being altered by the condition of rock‘n’roll, which right now is as bad as it’s been post-Chuck Berry asking Beethoven to roll over.

These things occur in cycles, though. Youth cultures fade and wither, musical genres dim before often coming alive once more. Guitars will be good again, so let’s not mourn their demise from the top-end of festival scheduling. Run to where the inventiveness is happening. Waste no time.

Longitude: five acts not to miss

Solange Sunday’s headliner is writing some of the most trenchant racially engaged songs of her generation, forging a career that’s seen her move to teen pop, to Motown-style grooves, to thoughtful soul, all the while doing things completely out of step with most commercial R&B.

SZA The Top Dawg Entertainment star’s thoughtful neo soul style hit a new peak last year with CTRL, a phenomenal album that examined love, sexual politics and self-esteem. She’s since followed it up by appearing on the Black Panther single All the Stars with Kendrick Lamar.

Migos For years the southern rap trio have been spitting their rapid-fire couplets over sledgehammer trap rap beats, but Quavo, Offset and Takeoff have hit a new period of cultural relevance in the past couple of years with their albums Culture and Culture II, and singles such as Bad and Boujee.

Anderson .Paak The silky California rapper-singer was one of the hottest artists on the planet back in 2016 when he released his soulful solo album Malibu and the more hip-hop-led NxWorries, a joint project with producer Knwledge. Expect those records to feature heavily throughout his set, though .Paak has thrown out a few loosies lately too, including the more electronica-influenced ‘Til It’s Over.

Sequence With songs such as Tnm and Stunna, the tuba-voiced Athlone artist draws from British grime, his Nigerian roots and a steel pan-driven, future-cop production style. A rapper of huge potential.