Jones, who was the only singer to perform a song in Irish at Eurovision, lived in the US since the 1980s 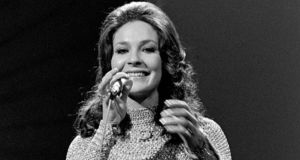 Sandie Jones: the Eurovision singer has passed away in the United States, aged 68

Sandie Jones, who represented Ireland at the Eurovision Song Contest in 1972, has died aged 68.

The Irish singer, who performed the song Ceol an Ghrá (The Music of Love), died after a long illness in the US, where she lived for some years, her family confirmed to RTÉ.

In the 1972 ballad, which begins “Éistigí, éistigí, cloisim arís é, ceol an ghrá” (“Listen, listen, hear again, the music of love”), Jones sang about hearing ceol an ghrá wherever she was, and about being in Tír na nÓg. She was the first and only singer to perform a song in Irish at Eurovision. The song came in 15th place with 72 points at the 1972 contest in Edinburgh (Luxembourg’s Vicky Leandros won with Aprés Toi). The single went to number one in Ireland, as did her follow-up the same year, What Do I Do?

Born in Crumlin in Dublin, and one of 11 children, she began recording songs from 1969, including five singles, before she was selected for Eurovision to sing the song by Joe Burkett and Liam Mac Uistin. She had many top 20 hits and sang with showbands, including the Dixies, the Royal Earls, and the Sandie Jones Band. She went abroad in the 1980s to continue her career.

She featured in RTÉ TV shows including My Ireland.

Sandie Jones is survived by her siblings Bernadette, Breda, Tony, Paddy, Peter, Paul and Tom. Her family hopes to bring her body home to Ireland for burial with their parents.

Gillette ad: Why it's good for men and women that we're having this conversation
9