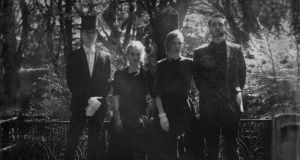 Returning to Ireland a few short months after his Forbidden Fruit open-air appearance (during which constant rain almost stopped play), Justin Vernon has real walls and a roof here, which should definitely enhance the subtleties of his often very fine music. Vernon will be performing songs from his three studio albums – last year’s 22, a Million, 2011’s Bon Iver, Bon Iver, and 2007’s For Emma, Forever Ago, the album that jettisoned the songwriter from obscurity to hipster-household name. As part of Sounds from a Safe Harbour Festival. Tony Clayton-Lea

Fionn Regan
Live at St Luke’s, Cork, 7.30pm, €20, uticket.ie
There’s a whole lotta cool stuff happening as part of Sounds from a Safe Harbour Festival, but one of the smaller delights is this gig featuring surely Ireland’s most enigmatic singer-songwriters. Fionn Regan’s most recent album, The Meetings of the Waters, was released earlier this year to huge acclaim (The Ticket: “as wholly impressive as it is agreeably inscrutable”), but it’s in the live arena that Regan should be experienced. Skittish, serious, charming, rugged – Regan is a terrific guitarist, too. TCL

Amiina
Cyprus Avenue, Cork, 7.30pm, €17.50, cyprusavenue.ie Also Sat The Workman’s Club, Dublin 8pm €16 theworkmansclub.com; Sun Dolan’s Warehouse, Limerick 8pm €20 dolans.ie
Icelandic group Amiina has changed since the release of its debut album, Kurr, 10 years ago. The all-female group – who previously had been Sigur Ros’ string section – expanded its line-up with some (as its website has it) “masculine infusion”, but if you think the music got in any way heavy-handed you’d be wrong. Texture is the keyword, and this is even more apparent with its latest recording – a live score to the 1913 silent film, Fantômas. Along with selections from previous albums, expect imaginative music performed on instruments as different as the table harp and the – wait for it! – metallophone. TCL

Anyone that has witnessed The National live   – and it is exactly a witnessing experience – will have an inkling of what to expect from these shows. The Cork gigs are, once again, part of Sounds from a Safe Harbour Festival, and while we like the Opera House, we think Vicar Street is a better option for the full-blown National onslaught. Of course, it won’t all be contemporary alt.rock dynamics, as the less frenetic new album, Sleep well Beast, proves. Gigs of the week, no question. TCL

Whelan’s (Upstairs), Dublin, 8pm, €16, whelanslive.com
It isn’t every day that you come across an indie dream-pop singer and songwriter who – when they’re not schlepping it from stage to stage – works for the International War Crimes Tribunal, but that’s exactly what Utrecht’s Annelotte de Graaf does for a full-time living. When she isn’t working at that she takes time out to perform songs from her much-praised 2016 debut album, Fading Lines, which she self-funded. If you’re looking for a less frazzled, semi-acoustic My Bloody Valentine, or a bittersweet Beach House/Mazzy Star mash-up, then you’ll find plenty to love here. TCL

The 13th edition of the Clonakilty International Guitar Festival kicks off with a headline gig (in DeBarra’s Folk Club) by US singer-songwriter Laura Cortese. On Wednesday, September 20th at the same venue, there’s a terrific gig featuring Wallis Bird, Mick Flannery, Lisa O’Neill and John Smith. Events throughout the festival take place across the west Cork town, from libraries to butcher shops. Other acts performing include Moxie, John Spillane and I Draw Slow. A particular highlight will be the presentation of the FAI (Folk Alliance International) Lifetime Achievement Award to Dónal Lunny. Runs until September 24th.  TCL

Red Hot Chili Peppers
3Arena, Dublin, 8pm, €89.50/€69.50/€59.30 (sold out) ticketmaster.ie Also Thurs (sold out)
These rescheduled dates from last December have been a long time coming for the fervent Red Hot Chili Peppers fan. Frankly, Ireland loves the Peppers to bits, which is why we’ve lost count of how many times they have played here in the past five years. Familiarity breeds contentment, then, but perhaps new to the ears of long-time RHCP fans is special guest, Lady Leshurr (aka Melesha O’Garro), the UK singer and rapper best known for her freestyle series, Queen’s Speech. TCL