Songs of the Week: The Rubberbandits enter uneasy territory

Plus: it’s time for the men in white coats to make a visit chez Bono and the lads 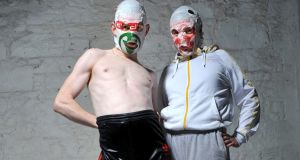 THE RUBBERBANDITS
Sonny ***
Given the public service The Rubberbandits are performing here, using their platform to raise awareness of issues around mental health, it may seem churlish to quibble over the fine print. The duo appear to be transiting from comedy to activism. And in doing so, it seems to me, the concept behind them begins to come apart at the seams. Wearing masks and hiding behind characters is fine for comedy. But does it work for activism? At a Q&A session at Electric Picnic earlier this month, Blindboy seemed to feel this was a line he was able to walk. Personally, I’d doubt whether he can much longer.

U2
You’re The Best Thing About Me **
Island
I’m not saying the lead single from U2’s Songs of Experience album is terrible. Like Jackie Treehorn, Bono and co draw a lot of water in this town. But I will say that if this were a movie scene, it’d be the scene in The Aviator where Di Caprio starts gibbering incoherently and the men in white suits glide in to usher him out of harm’s way. Not an unqualified triumph, then.

AVRIL RUSHE
Bring Sam Home ****
All-Ireland final weekend is upon us. In time-honoured tradition, we Mayo supporters have lost the run of ourselves. We’ve painted the gable wall red and green. We’ve painted the van. Hell, some of us have even painted the cat. For 66 years, the heroism and fortitude of our footballers have sustained us. They’ve given us bread. This year, please Jeebus, give us roses too.

ZAYN ft. SIA
Dusk Till Dawn ***
RCA
Incidentally, if Mayo do win on Sunday, I should give fair warning that next week’s column will be filed from inside a cement mixer somewhere near Bohola. Like Zayn, I’ll be partying from dusk till dawn. And like Sia, I’ll most likely have a bucket stuck over my head. Yee-haw!