Ryan O’Shaughnessy holds it Together amid Eurovision madness 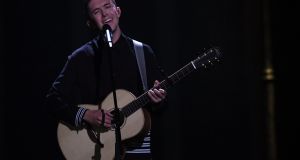 It’s been a wild ride for Ryan O’Shaughnessy: beating the odds to qualify for the 2018 Eurovision Song Contest final, seeing his song Together become a global talking point around issues of diversity and inclusion, rising to third place in bookmakers’ odds, and then ending up 16th in the competition overall.

It is all grist for his creative mill as a songwriter, he says: “I go travelling or I do something strange with my life and then I come back and I’m like, okay, it’s time to write some more . . . this whole Eurovision thing, this has been the something strange.”

The 25-year-old Skerries man was speaking on Saturday afternoon, in advance of the Eurovision final. After the competition, while allowing that “we didn’t get the points we really wanted,” he said he was “overwhelmed at the moment with emotion and happiness. All the work we put into it, and all the support we got from back home – it’s just been insane and more than we could have hoped for.”

A former competitor on The Voice of Ireland, Britain’s Got Talent, and The Hit, he released an EP in 2012 and a studio album in 2016. His musical taste runs to what he calls the “oldies” of singer-songwriters – James Taylor, Joni Mitchell – and while he grew up with Eurovision (his uncle Gary O’Shaughnessy sang for Ireland in 2001) he says he lost respect for the competition in recent years because there was a “lack of good songs”. His interest was sparked when Portugal’s Salvador Sobral won in 2017 with a simple ballad: “Salvador winning last year just reminded me that the Eurovision is a song contest.”

He and his writing partners Mark Caplice and Laura Elizabeth Hughes did not initially conceive of O’Shaughnessy performing the song at Eurovision, but RTÉ proposed that he be the singer when they heard his voice on the demo reel.

“It’s something I had to think about because a lot of artists who go to Eurovision might not succeed. It’s kind of tough for them in their careers afterwards,” says O’Shaughnessy.

“I only said I would do it if I was able to be just be myself and if I had an opinion about something I would just say it and not beat around the bush, like I kind of did when I was in the limelight before with Britain’s Got Talent. It’s been really positive to hear that people are respecting me for saying it as I see it.”

While it was O’Shaughnessy’s idea to include dancers in Together’s promotional video, he says his initial vision did not necessarily include a same-sex couple. “I wanted there to be a vibe of love, and it just so happened that when the music video came around, the best dancers in Dublin were Kevin [O’Dwyer] and Alan [McGrath], and I said why not have the two guys doing the dancing,” says O’Shaughnessy. “We never expected it to be such an exciting buzz about there being two guys involved . . . but it’s welcome.”

The fact that the video and stage performance have sparked conversations about diversity and inclusion is a sign of the times, he thinks: “We are living through it right now. There are still a lot of things that are changing in Ireland . . . We’ll look back on this in 10 or 15 years and say, wasn’t that crazy that that was even a thing, two guys dancing on a stage?”

It’s clear that O’Shaughnessy needs a bit of down time after all the Eurovision madness. He did not return back to Dublin on Sunday with the rest of the Irish delegation, but is remaining in Lisbon for a few days. Then it will be back to his “happy place” – the writing and recording studio – to “get some of the crazy stuff that’s in my head on to paper”.

A Slanting of the Sun by Donal Ryan review: Shining tales of rural woes