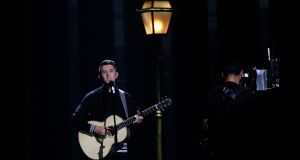 Ryan O’Shaughnessy performs ‘Together’ in Lisbon, during the first semi-final for the Eurovision Song Contest. Photograph: Armando Franca/AP

Against the bookmakers’ odds, Ireland’s Ryan O’Shaughnessy on Tuesday night qualified for the Eurovision Song Contest final with his song Together.

Of the 19 competing countries, Ireland was one of the 10 that gained enough votes from professional juries and the public to advance to Saturday night’s sing-off.

O’Shaughnessy sang second to last in the running order and gave a strong performance of the ballad he co-wrote with Mark Caplice and Laura Elizabeth Hughes.

He held eye contact with the camera while standing at a microphone and playing a guitar (or rather, miming, as all Eurovision instrumentation is pre-recorded, though vocals are live) as dancers Kevin O’Dwyer and Alan McGrath played out a love story behind him.

Though Ireland has won the contest more times than any other country - seven - its Eurovision fortunes have faded of late. This is the first time that Ireland has qualified for a Eurovision final since 2013.

“I am feeling really happy,” said O’Shaughnessy, minutes after the results were announced. “I can’t wait to see my family and give my granddad a hug. I’m feeling really proud of my whole team, everyone that has put their heart and soul into this project.”

The announcement of the 10 qualifying songs was a nail-biter, with Ireland the last to be announced.

“We’re used to that sinking feeling when the cameras go at the last minute to someone else, but tonight was different,” says Michael Kealy, head of RTÉ’s Eurovision delegation. “Tonight was just brilliant.”

Bookmakers and fan polls had predicted that Ireland would not make it through this highly competitive semi-final.

“We were the underdogs since we came into this competition,” said O’Shaughnessy. “We made the Eurovision what it was and we’re going to make it what it is in the future.”

Amongst the other qualifiers was Cyprus’s ethno-pop number Fuego. Cyprus strengthened its position at the top of the bookmakers odds after Eleni Foureira’s gave a dynamic singing and dancing performance on Tuesday, very much in the spirit of Beyoncé. The Israeli song Toy also qualified and is now thrid favourite to go the distance and win on Saturday.

One of the more unusual qualifiers was Estonia’s La Forza. The operatic number was performed by Elina Nechayeva, who wore a gown with a skirt that extended out on the floor around her, and onto which moving images and lights were projected.

The other qualifying songs were from Austria, Albania, Bulgaria, Czech Republic, Finland, and Lithuania.

It’s now full steam ahead for Team Ireland towards Saturday night, and beyond that… Dublin in 2019?

“Wouldn’t it be a dream?” said Kealy.

Tipperary, 1919: The woman who hid Dan Breen after Soloheadbeg ambush