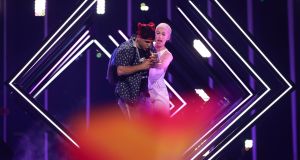 A fan invades the stage during the performance of SuRie (right) for the UK at the Eurovision Song Contest final at the Altice Arena in Lisbon, Portugal. Photograph: Jose Sena Goulao/EPA

A stage invader shouted about “Nazis of the UK media” as he snatched the microphone during the UK’s Eurovision performance.

An intruder in a black and red bandana rushed the stage as SuRie was performing her track Storm, shouting “we demand freedom” before he was hauled off by security.

The incident left SuRie without a microphone for at least 10 seconds and she was forced to clap along as cameras cut to fans in the audience.

She later resumed her song and finished to rapturous applause.

She was performing her track Storm dressed in a white asymmetric jumpsuit with flashing lights behind her as the audience sang along enthusiastically when an intruder snatched her microphone.

A statement from the EBU: pic.twitter.com/qiH1Df0MgW

The singer clapped along until she was given a new microphone.

BBC commentator Graham Norton said after she finished singing: “She was doing a brilliant job anyway.

“We are not sure what is going to happen or whether we will get an opportunity to perform again.”

He later added: “We are still reeling, there was a stage invasion.”

The European Broadcasting Union said the intruder was now in police custody. In a statement, the union said it offered SuRie the chance to perform again but she chose not to.

Stars rushed to offer support to the singer, with The Fizz’s Cheryl Baker tweeting “love your heart”.

She added: “I wonder if they’ll ask surieofficial to perform again? She must be in a state of shock. Where was the security? He could have had a weapon!”

Author JK Rowling wrote: “That was everyone who’s ever been on stage’s worst nightmare and it must have been scary, but what a pro, what a recovery surieofficial.” – PA

4 The 20th century belongs to America