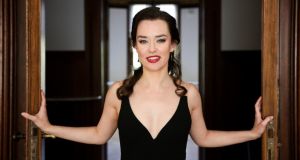 Sharon Carty has the ability to cross from mainstream opera to period performance.

Sharon Carty, Siobhán Armstrong
Hugh Lane Gallery, Dublin
hughlane.ie
Mezzo-soprano Sharon Carty is one of those Irish singers who straddles the worlds of mainstream opera and period performance style. She made her Wexford Festival Opera debut last year in the European premiere of William Bolcom’s Dinner at Eight, and also starred in Irish National Opera’s recent tour of Gluck’s Orfeo ed Euridice with the Irish Baroque Orchestra. The free Sundays at Noon concert in on April 28th the Hugh Lane Gallery finds her partnered on baroque harp by Siobhán Armstrong for a programme that will include works by Henry Purcell, Barbara Strozzi and John Dowland, as well as traditional Irish songs.