Paddy McAloon on his unsensous name, intelligent songs and being a ‘health disaster’ 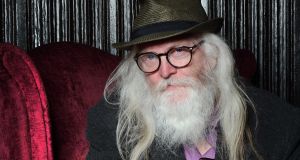 Paddy McAloon: “I have Ménière’s disease, and I’ve had problems for over 12 years, but in October 2017 it all descended on me again.” Photograph: Tom Sheehan

In the way that heavy-duty tides, unusually high sea levels and strong winds can bring about the reappearance of once-hidden tracts of beach, Paddy McAloon has been seen again. Admittedly the Prefab Sprout songwriter and singer isn’t easy to ignore – he has for some time now dressed like Gandalf on his way to work in the House of Lords: long, grey beard and hair tops a figure in a smart suit, a hand grasping a cane more for stability than display. There are reasons, however, why Durham-based McAloon makes irregular appearances, and they are nothing to do with the weather.

“I have Ménière’s disease, and I’ve had problems for over 12 years, but in October 2017 it all descended on me again. In January last year, I got up one day and I couldn’t keep my balance. I fell over, I felt incredibly sick, had to lie still on the floor, and to make it worse it was in the middle of a record shop in Newcastle. I couldn’t move.”

A disorder of the inner ear characterised by vertigo, tinnitus and hearing loss, Ménière’s disease – which has no known cure – has caused McAloon to retreat from public life. By this point, he says, he has pragmatically chosen to accept that unless matters radically change (which he feels they won’t), he will never perform a gig in front of an audience again.

“To play live, where you have volume involved, and amplification of volume, is courting disaster, so that’s really gone. I can’t say that I miss the gigs, but I don’t like the option being taken away from me.”

There is a sliver of resignation in his voice, and also regret, when he says that the best he can hope for is “singing into a little video camera at home, but even then the sound of an acoustic guitar is offensive to my ears. I can pick out chords and melodies on a small keyboard, so I can technically write, but it’s not what it was.”

To make matters worse McAloon (who cheerfully refers to himself as “Mr Health Disaster”) also has detached retinas. Oddly, the end result of the early onset of failing eyesight is the reason we’re talking: the reissue of his only solo album, I Trawl the Megahertz, which was first released in 2003. Something of an anomaly in the Prefab Sprout catalogue, in that it is virtually all instrumental, it unfolds with extended orchestrated sections not too far removed from Ravel or Debussy. The album, now reissued under the Prefab Sprout title, was inspired by McAloon’s “enforced idleness” of lying on his back and listening to people talking.

“I couldn’t read because of the medication, which entailed putting drops in my eyes,” he reveals, “and so I found refuge in audiobooks. Through those I thought it would be good to create a piece of music that was almost in the background, music that would drift in and out, with some spoken word.”

He contends it was not out of ego but concern for fans that I Trawl the Megahertz was initially issued as a solo album. “I didn’t want any criticism of it to be directed at the other members of the band by some people moaning about there being no hit songs, or that I sing on just one track – all of the normal complaints a fan might make about someone whose work you like, yet they’re doing something different.”

In the intervening years, McAloon reconsidered various pros and cons and now places the album alongside the likes of Jordan: The Comeback, Steve McQueen and, he teases, “lots of unreleased material that isn’t like what we were when we first started. In other words, I stared down my own objections. Yes, having I Trawl the Megahertz released as Prefab Sprout sounds crass from a branding or marketing point of view, but ultimately I wanted to reinstate an album that to all but the avid fans had virtually disappeared.”

The mention by McAloon of unreleased material is pivotal to his stature of not only one of contemporary music’s most elegant pop songwriters but also his almost fabled status as the writer of many hundreds of as yet unissued songs and albums. Is his work rate exaggerated?

“I tend to downplay it in interviews because it just adds fuel to the fire,” he replies. “The perception is that I’m just sitting on them and why aren’t I doing anything with them? Sometimes I put myself in the position of a fan, and wonder if I’m having a laugh by saying I’ve got so much unreleased material!”

We have a duty to ask – does he? “How many, is that what you’re asking? You can work it out by doing the maths – if you write three albums a year, approximately, and you’ve been doing that for 30 years, then that’s where we are. Most of it is in metal or plastic boxes with labels on them, and they are usually titled by the year or the project. If a songwriter or musician doesn’t play gigs, then they have an awful lot of time to fill in.”

On the boil is a batch of new songs for a forthcoming Spike Lee movie (Chasing Invisible Starlight, based on the children’s story written by Lee’s younger brother, Cinque), Pandora 63 (“about the Kennedy assassination”), and “a new project, a bunch of songs, that I plan to send to Trevor Horn. ” The more (or less) immediate future sees the release this September of a new Prefab Sprout album, Femmes Mythologiques.

It is, asserts McAloon, “a collection of reasonably short pop songs about women: Eve, Helen of Troy, Cleopatra, Queen of Sheba. I’m not selling it very well, am I? What the hell – it’s very tuneful, and the choruses are big. The whole idea of it is the distance between what we hear about people and how far removed they were from what we say about them. It’s a home recording, not a big, polished million-pound studio production, but it’s got heart.”

McAloon’s restraint is par for the course and is perhaps tempered by the great leveller that is a long-term illness. Never one to exaggerate matters, his focus and ambition (which seem endless) are balanced by the scope of his work (ditto). It helped, perhaps, that he didn’t play the pop music game very well.

He bursts out laughing. “I should have chosen a more sensuous name, for starters, but I wasn’t a strategist, a careerist – none of us was. Mostly the songs just try to be intelligent, funny, avoid cliches.” He has been saying this more often, he admits, “but on a Prefab Sprout record you won’t find anything that puts down a woman.” Even back in the day, he suggests, that seemed terribly old-fashioned if not wholly unnecessary.

“Did I idealise love? Yes, but that’s common enough in pop music. Did we have shiny, glossy pop songs? Yes, but that’s the aesthetic I like, a personal taste that has nothing to do with the times. Personally speaking I think we got by pretty well.”

I Trawl the Megahertz is released Friday, February 1st, through Sony Legacy. Femmes Mythologiques is scheduled for release in September

Desire As (Steve McQueen, 1985)
Prefab Sprout’s follow-up album made them unlikely pop stars, but songs such as Desire As highlighted an unconventional trajectory with questions such as “Is it true you always see desire as a sylph-figured creature who changes her mind?”

Last of the Great Romantics (Let’s Change the World with Music, 2009)
McAloon once again delivers lyrics that, although playful, mask a broken heart. “Here comes the last of the great romantics, feet planted wide, defying the tide. Come on, Gatsby, stand aside.”

The Old Magician (Crimson/Red, 2013)
The most recent Prefab Sprout album presents McAloon in mischievous form, with The Old Magician a wonderful sleight-of-hand self-reveal. “The old magician takes the stage, his act does not improve with age. Observe the shabby hat and gloves, the tired act that no one loves, there was a time he produced doves.”