Chris Cornell’s widow, friends and family in heartfelt tributes at I am the Highway special concert in Los Angeles

Foo Fighters and Metallica were among the music stars on show in California for a tribute concert to former Audioslave and Soundgarden singer Chris Cornell, who died by suicide in May 2017. Video: Reuters 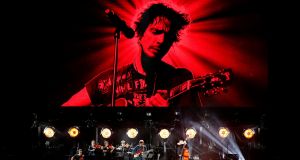 An image of Soundgarden singer Chris Cornell forms the backdrop as Ryan Adams performs during the I Am The Highway: A Tribute to Chris Cornell concert at The Forum in Inglewood, California. Photograph: Mario Anzuoni/Reuters

The widow of Soundgarden singer Chris Cornell led the tributes during a star-studded concert in his memory. Cornell, a major figure in the grunge-rock scene of the 1990s, died in Detroit in 2017 aged 52.

Soundgarden, formed in Seattle in 1984, were among the first groups to rise to prominence in a wave that later included Nirvana, Pearl Jam and Alice In Chains.

On Wednesday, acts including Metallica, the Foo Fighters and Miley Cyrus performed at The Forum in Los Angeles during a tribute concert titled I Am The Highway.

Cornell’s widow, Vicky, with whom he had two children, appeared emotional as she took to the stage to pay tribute to her husband. “We all know how music can change us, but Chris did something more extraordinary – he changed music and paved the way for so many from Seattle to across the globe.” she said.

“And that legacy, and his influence, will live for generations to come. I am so proud that, along with his legacy, his philanthropic work continues to grow and flourish.

“Chris would be so very proud. Simply put, to me, and because of all of you, Chris lives on, a music immortal whose passion for helping others is more alive today than ever.”

Cornell’s daughter, Toni (14), received a standing ovation after performing a cover of Bob Marley’s Redemption Song while standing in front of a picture of her father.

Actor Jack Black, himself a musician, said Cornell’s voice “could open a portal to another dimension”.

Other acts to perform included Josh Homme of Queens of the Stone Age, ane’s Addiction singer Perry Farrell, Adam Levine of Maroon 5, Ryan Adams and Fiona Apple. Actors Brad Pitt, Leonardo DiCaprio, Christian Bale, Tom Hanks, Courtney Cox and many others showed up to clebrate the life and talents of the singer at the 4.5-hour show.

Hosted by Jimmy Kimmel, the concert was in aid of the Chris and Vicky Cornell Foundation and the Epidermolysis Bullosa Medical Research Foundation.

In October, a bronze statue of Cornell was erected outside the Museum Of Pop Culture in Seattle.

A coroner ruled that he took his own life and toxicology tests revealed he had a cocktail of drugs in his system at the time of his death, though the postmortem examination report said they were not the cause of his death. – PA

The Perfect World of Miwako Sumida: Secret lives in Japan
7

Martina Cox: ‘In my eyes, Seán was always coming home’
10 Sound of the soul of African Peru
Real news has value SUBSCRIBE