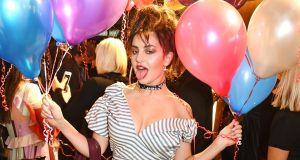 Anyone who has heard but doesn’t love Icona Pop’s I Love It isn’t a friend of Ticket – simple as. Written by the then-teenage Charlotte Aitchison, it foreshadowed a precocious talent who has since gone on to not only write songs for other artists (including Iggy Azalea, Selena Gomez and Blondie) but also stake out a solo career. To this end, Aitchison releases her third studio album, Charli, in two weeks’ time. Already, four tracks have been issued as singles (all hits, naturally), so between those, tracks from various mixtapes, and bangers from her previous two records (2014’s Sucker, 2013’s True Romance), there’ll be enough going on in the Electric Arena to drag you and beat you up. TCL

A divil for dealing in synthpop songs of heartbreak, Shura hits gold with her second album, Forevher. Earning four stars from The Irish Times, the English singer captures the pains of long-distance relationships on this album, while taking a more upbeat approach than she did on her 2016 debut. Even though her new music is the aural equivalent of a chef’s kiss, she has anthems in Touch, White Light and What’s It Gonna Be?, so if you’re in need of a feelgood bop, she’s the one. LB

If you haven’t opened your arms to the music of Mitski, then now is your time. Even if you’re not heading down to Electric Picnic, you have the luxury of five albums by the American singer-songwriter waiting to be discovered on Spotify. It’s easy to fall hook, line and sinker for her weirded-out indie music that thrives on being the outsider. She already has an incredibly devoted fanbase, so join the masses and get on board the Mitski bandwagon. It’s never too late to discover greatness. LB

Even if there’s a bigger party happening down in Laois, the Lost and Sound gang are kindly keeping things going elsewhere so that non-EP goers have something to do. Join the DJ dream team that consists of Claire Beck, Sally Cinnamon and Kate Brennan Harding at their residency Saturday night party as they lash out the best in electronic music for buzzers and sounders alike. It’s free in and kicking off at 11pm, so take this opportunity to dance like you’re not in a field. LB

And so it is. The final Grace of the summer before we make promises of hibernation and detoxes that will soon be broken. Grace is the queer techno night that launched in February and it’s been building up a huge underground following since. DJ Eavan is billed to play techno, acid and rave tunes on vinyl, and a surprise guest will be announced on the day of the event. Tickets will not be available to buy on the door for this event. LB

Another performer on the Electric Arena stage is Irish festival favourite (and EP regular) Róisín Murphy. Never one to needlessly mess about with either her music or wardrobe, over the past five years Murphy has really grown into her skin as an artist. Recent albums such as Hairless Toys (2015) and Take Her Up to Monto (2016) have upped her profile to the extent that she is viewed as a continuously serious contender in the areas of electro-pop, disco, house, dance and whatever kind of techno thing you’re having yourself. TCL

Wexford musician and songwriter Pierce Turner is a maverick who continues delivering work irrespective of commercial gain. Dividing his time between Ireland and New York, Turner came around to the idea of taking (as he writes on his website) “the great Irish folk songs of my youth” and rewiring them in only the way he can. The results can be found on Turner’s new album, Vinegar Hill, a collection of “folked-up” songs such as Monto, The Curragh of Kildare, Paddy’s Green Shamrock Shore, and The Holy Ground. Advice: leave your preconceived notions at the door. Maverick is as maverick does. TCL

Dublin’s Sean O’Brien has previous form in bands such as Raglans (and before that, the pretty nifty punk-ska group Trap Door), but after a few years in, shall we say, development, he returns with an abbreviated name and a songwriting/performing style that has been described as a blend of Jamie T and Buddy Holly. Add in names such as The Clash and Arctic Monkeys, and you have a vigorous brew. The gig will act as a preview of sorts for his forthcoming EP. One to keep an eye on, for sure. TCL

We Banjo 3, unsurprisingly, are a band made up of four members – yes, four – and they are two sets of brothers, Enda and Fergal Scahill and Martin and David Howley. Based between Galway and Nashville, they tamper around with banjos, fiddles, mandolins, guitars, percussion and the occasional harmony, straddling the genres of folk, bluegrass and traditional Irish music, and commit themselves to giving an energetic live show every time. LB

More than 36 years after Scottish twin brothers Charlie and Craig Reid formed The Proclaimers, you might have thought the creative juices would run dry. Not a bit of it, if their most recent album – last year’s Angry Cyclist – has anything to do with it. While their chart-bothering days seem well and truly behind them (their last UK Top 10 album placing was in 1994, with Hit the Highway), there’s little doubt that the strength and quality of their songs, from 1988’s Sunshine on Leith to last year’s Streets of Edinburgh, has continued through the past three decades. Special guest on this mini-tour is Kerry’s superb Junior Brother. TCL

Low-key, lo-fi indie-pop group Shrug Life preview their forthcoming second album, Maybe You’re the Punchline, with a three-for-one gig that sees them as nominal headliners. The band are adept at creating droll song narratives that run in parallel with firm indie-pop, and are well worth the effort. Special guests include socially uneasy folk/pop band The Deadlians and alt.folk-oriented songwriter Robbie Stickland. TCL

Life, we can all agree, sometimes takes you to places you had never really thought about. Australia’s Pete Murray, for example, wanted to use his prowess as an athlete to take up a career in sports medicine, but was sidelined by injury as well as sidetracked by a growing interest in learning how to play the guitar. The latter gradually trapped him; by 2005 he had signed with Sony Music Australia and released two multi-platinum albums, 2003’s Feeler, and 2005’s See the Sun. The songwriter is something of a mega-selling celeb in his homeland, so it’ll be interesting to see how back-to-square-one this gig will be. TCL

Yorkshire group Skinny Living have been plying their frenetic acoustic-pop/soul for over five years, only recently gaining the kind of commercial traction they deserve. The band’s earnestness in song (courtesy of singer Ryan Johnston’s lyrics, which focus on topics such as mental health) is counterbalanced by their live shows, which deliver a fiery mix of fun and games. TCL

As part of the Dublin Fringe Festival, party connoisseurs Club Comfort are hosting their biggest event to date, with live performances, DJ sets and discussions taking you from daytime into night. Shining a light on the underground DIY arts community in Ireland,  the Club Comfort DJs will be joined by dancehall dons Sim Sima Soundsystem, reggaeton specialist Ush Mush, bass fiends Wriggle and Selky & Don Rosco, who will keep things moving at a cool 160 bpm. If you’ve lost any faith in Irish nightlife or culture, this event will restore it entirely. LB

Cork musician, songwriter and composer Barry Wilson has laboured for a long time over his debut album, Portrait, for which this gig is the Dublin launch. From what we’ve heard so far, Wilson is old-school accomplished, a musician who is no stranger to exacting and (some might say, perhaps incorrectly) complex arrangements that wouldn’t be out of place on a jazzy Steely Dan or elaborate Prefab Sprout album. In other words, a smart one to take note of. Special guest is Ophelia, a Cork rapper/producer (and co-writer with Wilson) who will preview new material. TCL