Other Voices 2016: the Dingle session steps up a gear 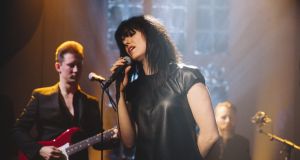 Imelda May at Other Voices. Photograph: Rich Gilligan 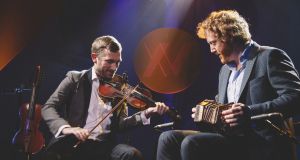 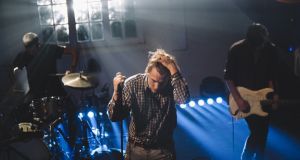 Other Voices has been threatening to become a “proper” festival for years. The dogs and dolphins in Dingle, Co Kerry, could sense change in the air – 2016 is the year it crossed over from a small, unique music event that for some years many audience members weren’t sure whether or not they could actually go to, to a bona-fide festival.

The memory of a twinkly, cosy get-together of industry folks and locals to film a live music show for RTÉ is now just that.

What Other Voices has become instead is a buzzing, proud, dynamic event that retains its ethos – and crucially its vibe – while expanding in many ways.

The first hint of bigger things this year came months out, when accommodation seemed a little trickier than usual to find in the town. The second happens on driving into Dingle from either direction on the first day of the festival. At one end of Main Street, a large digital projection on the outside of a building welcomes people to the eir Other Voices festival. Down on the seafront, a large wooden structure of the word Voices, with clever shifting lights inside evoking the constellations in the sky, proves the most popular plaything of the weekend. The sturdy 10ft high letters mean plenty of people, from the ages of five to 35, can be photographed climbing on top all weekend.

Other Voices is unique, but there are now commonalities with other music events, such as Iceland Airwaves – it’s another idiosyncratic festival in a relatively inaccessible place that holds local talent up on the same pedestal as travelling international acts.

Both festivals connect to a sense of national identity and pilgrimage. But where Airwaves is basically a multi-venue city festival, Other Voices is, again, different. A lot of art’s worth can be in its intention, and there is no denying the love for music and place that the Other Voices crew has, as well as the joy in pulling the whole thing off, year in year out, and often against the odds. There is much more of it to go around now, and there’s also the beauty in it being given away. All of it is free, yet it retains its high artistic standards.

The event is now officially “eir Other Voices”. Title sponsorship is always clunky, but the infrastructure of the event has been professionalised to a degree as a result. A less comfortable corporate fit is the Music Trail – the dozens of free gigs in venues around the town – being sponsored by an international beer brand.

Last year, the audience grew in numbers, creating a packed feeling. This year, with more gigs across more venues, and more people, the crowd is better spread and better catered to with mobile food venues. A new music trail outside the town, with roughly 100 people being bussed to one-off shows along a handful of venues around the peninsula, helps to spread the load on Saturday.

It is certainly busy, but away from the main gigs you can still find a quiet corner, which is one of the reasons people head to Dingle for the festival. That feeling and intention of getting away from it all shouldn’t be neglected and this year it feels well maintained.

Access to the church is now regulated with wristbands, with the night split in between a first and second half, which works well. Most of those who come to Dingle, though, know and happily accept that they won’t see the church gigs, and instead soak up the roughly 100 or so sets taking place in the bars, pubs, shops and businesses in and around Dingle over the festival’s three days.

Irish dominate in the church

This year’s church line-up is heavier than usual on Irish talent. The only international acts are Pixie Geldof, Kojey Radical and Margaret Glaspy, none of which might individually merit a trip to Dingle for an outsider. Last year’s line-up, by comparison, featured Jack Garratt, Gaz Coombes, Little Simz, Ane Brun and Keaton Henson, to name just a few.

The most interesting – and riskiest – double-header in the church is the second Saturday night slot with Girl Band followed by Rejjie Snow. Girl Band are equal parts challenging and compelling, and in the church their chaotic noise clicks brilliantly, unlocking an access point that was previously too often hidden.

Rejjie Snow played a blistering gig at Other Voices’ Electric Picnic outpost, but transported to the Dingle altar, he becomes somewhat exposed. Despite the hype and praise surrounding this young Dubliner, there is something missing. Maybe it’s his amorphous approach to song structures and beats that can feel a little directionless. Perhaps it is the obtuse nature of his lyrics. But more than anything, there is a sense of underdevelopment masquerading as ambiguity: who is Rejjie Snow as an artist and what is he trying to say? What is his artistic voice, his truth, his aesthetic? He held his own in the church, but we didn’t get any closer to answering those questions.

On the Music Trail, Róisín O plays a packed, excellent gig in the Imro Other Room, at the back of An Chonair bar, displaying what happens when a musician keeps grafting away and honing her craft. In Nellie Fred’s, Bad Bones brings her compelling tunes alongside an equally captivating dance duo. Ships, in the same venue later that night, also play a blinder. The club night Lumo (which includes Nialler9) has so much fun DJing upstairs in An Droichead Beag on Friday night that they do it again on Saturday night.

Late in the evening, with the town now packed with locals and tourists, New Jackson, aka David Kitt, is playing a thumping, pulsing set in An Chonair. It illustrates the good bits of Other Voices, and some of the challenges. The room is packed and the atmosphere is electric – but it takes fully 20 minutes to squeeze through the crowds to the thronged venue at the back.

It’s not all about the music. Poets and musicians perform in Murphy’s ice-cream shop, the courthouse, the brewery, and across the pubs, which as anyone who has been to Dingle knows, rank among the finest in the country. Pick of the spoken word bunch has to be John Cummins. His sublime set in John Benny’s brings the lovely rips of this Dublin accent down to Dingle, a town he knows well. He mines extra syllables out of words to slick, charming effect and takes something as ordinary as memories of your mother roaring down the street at you, and turns them into something oddly hilarious and disarmingly beautiful. He was here two years ago and wrote a poem to mark the occasion: “Ceoil is at the core of all heart,” he tells us, as “all of us be one in the Dingle”.

Jim Carroll’s Banter series in Foxy John’s, programmed with Molly King, maintains its high standard, with punters especially raving about neurologist Dr Suzanne O’Sullivan’s discussion about psychosomatic illness, and documentary-maker Aoife Kelleher’s talk. Caoimhín Ó Raghallaigh’s talk and tunes go down a storm – though you could barely slip a cigarette paper in the room once he is up and running.

There is also plenty of talk at Ireland’s Edge, a conference that accompanies Other Voices in the Skellig Hotel. On a panel about emigration and the diaspora, Annie Mac makes interesting points about how Brexit impacts on the feeling of being an immigrant in England. Ireland’s Edge makes official the sentiment behind Other Voices that the festival’s founder Philip King talks about– mixing a crowd of locals, government folk, artists, and music fans, with conversations about funding the arts, the 1916 centenary, how to enable creative Irish people in their own country, and finished off with an all-star trad band featuring two Begleys and that man again, Caoimhín Ó Raghallaigh.