Ones To Watch 2018 festival: everything you need to know 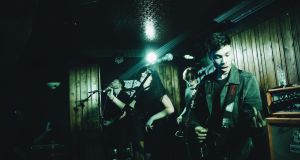 Sub Motion: one of the acts to catch at Ones to Watch 2018

Ones to Watch? What’s it all about?
There are three points in the calendar year when new bands, young acts, fresh singers and fragrant songwriters get a chance to get themselves heard. Hard Working Class Heroes, which takes place in Dublin each October, is the best known. Two months later, in December, is the Dingle-based Other Voices’ Music Trail, which is fast becoming a reason in itself to travel. And then there is the Ones To Watch festival, co-organised by the estimable Dublin venue Whelan’s.

Now in its 8th year, Ones To Watch is a perfect opportunity to see the Irish acts you’ll be loving in the future right now. Little did we know 12 months ago (during the festival’s seventh iteration) that the likes of Katie Laffan, Laoise, Maria Kelly, Pillow Queens, The Fontaines and Farah Elle would have had such a fine 2017. And who could have known that Fangclub, which played as part of Ones To Watch 2016, would see their debut album land on the RTÉ Choice Music Prize 2017 shortlist?

Sounds good. When and where is it on?
More than 50 bands will be playing at Whelan’s across four days, from January 18th to 21st. Day tickets cost €5, with weekend tickets priced €10. Available through Whelan’s ticket office

Herewith, then – unashamedly sticking a licked finger tip in the air to determine which way the wind is blowing – are the Ticket’s Top Ten Tips from Ones To Watch 2018.

Fronted by Rebecca Geary, Sub Motion look set to join Bitch Falcon, Otherkin, Mindriot and Fangclub in the Super League of Irish rock bands that actually sound, look and perform as if they know what they’re doing.

Molly Sterling
Singer and songwriter Molly Sterling has been tipping around the edges of an original sound for a few years. With cool songs such as Plain Static you can tell she’s getting there with no small degree of elegance and élan.

There’s a fine line between delicate and dreary, but Slow Skies – singer/songwriter Karen Sheridan and producer Conor Herron – tread carefully and with poise. Newer tracks such as Dancing highlight a more pop-oriented direction that sees Slow Skies quicken the pace. No harm.

Monaghan’s Sun.Set.Ships channel an 1980s electro-pop vibe with the benefit of terrifically infectious (and tough) guitar riffs. The Monaghan-accented vocals lend to the general air of idiosyncrasy that seeps from this trio’s music.

Roe
From Derry, Róisín Donald is yet another classy songwriter whose electronica-tinged music has been making anyone who hears it sit up, stop what they’re doing, and take notice. Pop gems such as Playground Fights and Fake Ur Death will make everyone’s year brighter, better, and far more tolerable.

Girlfriend
Rough around the frayed edges they might be, but any band that writes a song called The Stuff You Think About Late at Night and Never Tell Anyone About is fine with us. Hana Lamari, Lisa Rogers, Lahela Jones and Sophie Dunne – remember these names.

Chancer
Chancer’s instrumental music may take a few leaves out of the books of various post-rock bands, but there’s an almost neo-classical element to tracks such as Stutter Island that puts them front and centre. Band name not to be taken seriously.

Sylk
Dublin-based duo Sylk (Bebhinn McDonnell and Taylor Doyle) is an audio-visual conduit for intuitively immersive and bass-heavy electronic music. One of the most intriguing acts around.

Young Earth
Tunes? In these alt-everything times we can forget that music is also made to whistle along with. Tallaght’s Young Earth make no mistakes with songs as earworm-friendly as Worth It and Frequency Illusion.

Lowli
Songwriter Róisín Lowry conjures up all manner of neat spookiness with beautifully arranged melodies that will surely see her shine this year.