Rock’n’roll garage music with a Dublin twist. Plus: Francis & the Lights; The Streets 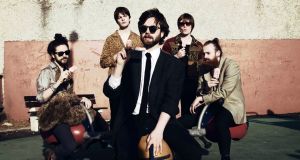 Why: Rock’n’roll is an established genre with a rich history, so a band coming to the genre these days can either a) throw themselves into a niche retro revival, b) recreate the greats, or c) make like Fontaines D.C. and hit upon a fresh twist.

The Fontaines don’t pretend to be from anywhere but Dublin, and that charges their colloquial rock’n’roll garage music with an authenticity that makes them stand apart.

Their debut single, Liberty Belle, is an ode to the Dublin 8 area and is a short, sharp, infectious slice of music that you wouldn’t want to look at twice in the street thanks to vocalist Grian Chatten’s engulfing and authentic Dublin accent. The band’s second single, Hurricane Laughter, is a hi-octane rock song that only adds to the excitement.

Chatten, along with Conor Deegan III, Carlos O’Connell, Conor Curley and Tom Coll, only have four songs out at the moment but there’s enough storytelling spark and Big Smoke verve in those four songs and a handful of live ones to be released to get you clamouring for more. At their live gigs, Chatten’s piercing gaze adds entrancing power to their performances.

The Dublin five-piece have impressed at festivals like Hard Working Class Heroes, Electric Picnic and Other Voices in 2017, and 2018 is the year that the band look set to break out of their hometown.

Francis & The Lights – Just For Us

The American singer-songwriter and Peter Gabriel-soundalike Francis Farewell Starlite (probably not his real name, right?) has previously toured with Drake and Mark Ronson, and collaborated with Justin Vernon, Kanye and Chance The Rapper too. The synth-popper dropped a surprise new album, Just For Us, featuring 10 sweet new tracks, a highlight of which is the title song which, once again, features Vernon.

Ahead of his reunion shows in April and the 15th anniversary of his seminal debut, Original Pirate Material, Mike Skinner dropped two new tracks at the end of 2017 that posit Skinner leaving his UK garage sound behind for his rekindled Streets project and taking inspiration from UK grime and hip-hop.