‘Nobody gets rich from folk music, which is a great leveller’ 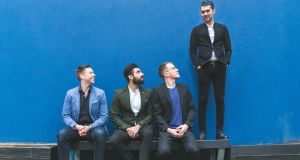 This year’s Doolin Folk Festival has its gaze planted firmly on a wide horizon with a programme that places home-grown folkies such as Scullion and Luka Bloom alongside traditional musicians such as Lúnasa, Muireann Nic Amhlaoibh and the ever-adventurous Martin Hayes and Dennis Cahill. Cosying up alongside are a swathe of Irish and international acts who thrive on the cross-currents that flow in and around their and our music: currents that flow from Scandinavia to Persia and southwards to the Antipodes.

Navá are an Irish Persian ensemble whose debut album, Tapestry, weaves an intriguing path that explores the musical forms that originated in the two geographically disparate locations. Paddy Kiernan, Navá’s banjo player, thrills at the challenges and unexpected rewards that have come from playing with Iranian brothers Shahab and Shayan Coohe, along with Mayo guitarist and bassist Niall Hughes.

“Myself and Niall play a lot of improvised music in bluegrass, jazz and blues”, he says, “and Persian music is very much based around improvisation as well. So improvisation was what brought us together first and where we found some common ground.”

“Meeting the guys has opened my eyes up to this very ancient culture, which I find really evocative. I tend to think of Irish music as low to the ground, in some ways,” he says. “It’s dance music. It’s music that grew out of agrarian peasant culture and it’s quite earthy, but Persian classical music is very lofty and spiritual, so it was interesting for us to try to musically meet in the middle, and to try to figure out this project.”

The band use the word “Persian” to describe their music, as it embraces a diversity of musical influences from Iran, including Kurdish, Azerbaijani and Arab influences, as well as indigenous Iranian musical forms. Their debut album title, Tapestry, is well-chosen.

Shahab Coohe plays the santoor, a trapezoid-shaped stringed instrument that predates the dulcimer and piano. For him Navá is a natural extension of how he, as an ethnic Persian man, lived his life through music in Iran. Their shared music is unquestionably a uniting force, in his experience.

Music, art and philosophy have always been the main feature of our society,” Shahab says. “They’ve always influenced people and I think it’s what can unite people all over the world, not thinking of war or violence. It’s always been about peace, you know?

“Music has always opened doors for me. It’s like a garden for me. When you’re in it, it’s endless. You’ll always find another door. You just have to find the key to open it. As long as you’re passionate about it, there is always a way. You have to just keep searching.”

Swedish folk group Väsen have had long ties with Ireland, particularly as a result of their friendship with Dervish, and Dervish’s adoption of the beautiful tune Josefin’s Waltz, written by Roger Tallroth, Väsen’s guitarist. Olov Johansson plays nyckelharpa and he’s quick to put a finger on one of the band’s earliest influences.

“I remember very early seeing an Irish band called Patrick Street with Kevin Burke on fiddle”, Johansson recounts, “and I was so impressed by his ways. Taking care of the audience, how he communicated with the audience. It really made an impression on me. We’re very comfortable reaching out and connecting with musicians of all backgrounds. We’ve enjoyed many other bands from Africa and Latin America. It has been really striking for me to see what they did with their traditional music, and how they presented it on stage. That was more of an important influence than even musically, I would say, because we knew that already.”

Johansson recounts the ease with which Väsen coalesced with Dervish: and how natural it felt for them to play together.

“We met in the hotel lobby in Copenhagen when it was the cultural capital of Europe,” he says. “We started to play tunes together. That was it: just the joy of playing music together. No clever or scheming plans: just the joy of music. And I think that’s the synchronicity of musicians bumping into one another: it can often create the perfect conditions for creativity to flourish.”

The Maes are Melbourne sisters Maggie and Elsie Rigby: two musicians long schooled in the finer points of folk, through their folk musician parents.

“As teenagers we fell in love with folk music from America and Canada, Ireland and the UK,” Maggie says. “Bands like The Wailin’ Jennys, Crooked Still, Kate Rusby and Gillian Welch. But I would say that the biggest influence on our music still comes from singing at the top of our lungs around a campfire with our friends, the songs we absorbed peripherally when we were children, the music that was all around us and inside us that we didn’t realise until recently that we were so lucky to have.”

Elsie is convinced that music has a powerful role to play in this time of fractured geopolitics where borders and walls dominate so many conversations.

“It’s overwhelming to think about big political events and easy to feel helpless,” she offers. “Music is the way I remember what’s important to me. Music can sneak into the space between two opposing angles. Bringing together a room of strangers and sparking unlikely conversations – I think this is how bridges begin. I am grateful for the vast range of people I have come across through playing music, and the generosity we have been shown. It makes it impossible to forget the good nature of human beings from any walk of life.”

First-hand experience has taught The Maes the value of keeping an open mind when it comes to first encounters.

“It’s very hard to say exactly what the purpose of folk music is from a practical point of view but there is something intrinsically human about it”, Maggie says. “So many times we have walked into a room for a gig and felt like we had absolutely nothing in common with anyone in the room – be it a room full of Queensland cattle farmers or London hipsters or a French Jewish wedding. After we play it’s like a wall comes down and suddenly we are in a room full of the friendliest people we’ve ever met. Whether they connected deeply with the music or they had a great night out with their oldest friends or met some new ones. You definitely see the best of people when your job is playing music. I think music is about connecting people, to each other, to their emotions, to their communities or their societies.”

“Folk music is the people’s music,” Maggie adds. It’s not music to listen to, it’s music to participate in, to sing along to, to dance or clap or whatever way you choose to be involved. Nobody gets rich from it either, which is a great leveller. It’s inclusive, which makes it such a good tool for promoting understanding in all sorts of ways.”