Patti Smith’s support performance is a poetic, urgent statement to the field of thousands 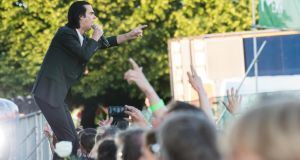 “It’s daylight. How terrifying.” There are moments when a backdrop of sunshine hangs well, but the preying mantis of rock has just burned his way out of an onyx chrysalis. As much as Dublin is delirious with a summer that no one is mentioning in case they jinx it, Nick Cave is always going to desire blackout blinds.

Already down the ego ramp into the crowd by the second song, grazing the fingertips of the devout, you know, and I know, and they know, this is going to be special.

The evening begins, sun blazing, with the simultaneously weight and lightness that is in the air at the moment. Ireland is on some kind of beautiful rollover and everything is clicking into place.

What better anthem to herald and rally than Patti Smith’s opener, The People Have The Power. “Use your voice,” Smith shouts as the song closes. Yeah, we did that.

Smith’s set, as known as it is to fans, takes on some kind of elevated vibe. It may be the best many here have seen her play in recent years; a poetic, urgent, powerful statement that makes a field of thousands feel like an intense conversation at a low-lit house party. Even the roadies in their cut-off shorts, faded black T-shirts, and lip-hanging cigarettes take pause.

Cave emerges, the host of Dante’s warped fairground, and the crowd almost arches back in reverence.

Red Right Hand skins across a coral reef of fists before Into My Arms renders the romantics speechless but humming. And all the while, the man sits and prowls, a purposeful, knowing performance with an unspoken audience buy-in.

The chill descends. Those who expected a dip in proceedings are cold-shower woken by Stagger Lee, at which point a portion of the crowd is on stage, the black and white visuals blasting out a monochrome bacchanalia.

Euphoric and violent, Cave stalks us all, and what is notable is how susceptible the audience remains. A respect never deferential but tantric in its consumption and anticipation.

There is no sloppiness with Cave. Everything is pointed and aimed as an archer, targeting personal connections as he prowls.

What feels like a false goodbye and ends up being one only increases the anticipation, a waiting more pronounced than the long bar queues, or sold out T-shirts, or the foreboding, circling helicopter. He does not appear again.

It many ways, there is so much grief in this concert, and the sense running away from the weight of it all. But the consolation of tragedy is art, and then the fading light, and the slowly dispersing crowd, soaked in the heaviness of an artist truly transmitting his emotions. And us all there to receive them.

It’s dark, it’s the summer. It shouldn’t make sense. But it does.

Small Hours: Who suffered most, John Martyn’s partners or his children?
Real news has value SUBSCRIBE