New Music Dublin manages to kick up a storm 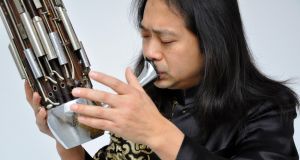 You just can’t envy John Harris, the director of the New Music Dublin festival. At the beginning of March the so-called Beast from the East and Storm Emma saw the day-by-day dismantling of the first festival he had programmed, with musical events disappearing like roofs carried off into a dark sky under the force of a storm. He promised to salvage whatever he could and, true to his word, came back with the amusingly titled New Music Dublin 2018: Defrosted at the National Concert Hall (NCH) last weekend.

The salvaging was not exactly an exercise in free choice. The original schedule of 18 events ended up being cut in half. Friday evening at the NCH was already allocated to the RTÉ National Symphony Orchestra’s (NSO) free Culture Night programme under principal guest conductor Nathalie Stutzmann, with not a single living composer in sight. And, for example, the originally planned contributions from Crash Ensemble disappeared entirely.

The sheng is a bowl-shaped Chinese mouth organ topped by a cluster of bamboo pipes and Wu Wei is its prime exponent when it comes to collaborations with Western composers. It’s related to the saenghwang of Unsuk Chin’s native Korea, an instrument the composer associates with “yearning for a distant sound”. David Power is engaging with the canon of classical music in much more varied ways than earlier generations of pipers.

Both Chin and Volans approached the solo instruments with delicacy, even reverence, finding areas of common ground in the orchestral sonorities they created so that the chalk and cheese effect of many orchestral embraces of non-classical instruments was avoided.

The originally-planned festival grand finale was also orchestral, an NSO performance of David Fennessy’s Conquest of the Useless. The Defrosted substitution was achieved by moving a performance of James MacMillan’s Stabat Mater, with the composer conducting Chamber Choir Ireland and the Irish Chamber Orchestra, from St Ann’s Church on Dawson Street to the NCH. Given the quirkiness and unpredictability of the acoustics in St Ann’s, the change of venue can only have been for the better.  MacMillan approaches the text of the Stabat Mater from a position of firm Catholic faith. It’s as if the suffering it relates is fully his suffering, too, and he uses jagged dissonances as freely as painfully-inflected vocal solos to convey his message with unfailing vividness. The performance was riveting from start to finish.

The single biggest presentation was a late work by Karlheinz Stockhausen, part of the cycle Klang which he left unfinished at his death in 2007.

Stockhausen’s creative output took an unexpected turn in the 1970s when he embarked on the seven-opera cycle Licht (Light), with each separate opera devoted to a different day of the week. It occupied him from 1977 to 2003.

In 2004 he started another cycle, Klang (Sound), 24 pieces for chamber ensembles or solo instrument, one for each hour of the day. He had completed 21 at the time of his death. The third piece, Natürliche Dauern (Natural Durations), is for solo piano and is itself a set of 24 pieces which takes more than two hours to perform.

The idea behind the piece is encompassed in the title. The composer explained: “Natural durations of the piano result from the register in which one strikes, from the intensity, from the sustain pedal. If the entries of other tones, intervals and chords now depend on such durations, then melodies, harmonies and polyphonic moments result from these natural durations.”

A first hearing of the complete Natural Durations gave the impression of a certain patchiness. There are moments of wonderful sonic intersection, for example, the way the spaced-out single notes and chords relate in the opening section. And there are other places where ideological thoroughness seems to get the better of the musical result. The gritty commitment of Simon Smith’s performance was at all times impressive.

One of the most unusual festival events was The Secret Music Trail, a 2½-hour walkabout with musical stopping points curated by Ergodos’s Benedict Schlepper-Connolly and Garrett Sholdice. The tour visited Iveagh Gardens, the Copper House Gallery, and Ergodos’s own studio in Portobello, and also captured performances on the Grand Canal, in St Finian’s Church on Adelaide Road, and in the Real Tennis Court on the NCH’s Earlsfort Terrace site.

It was a lovely idea and I found myself particularly taken by the rollicking rawness of Aoife McAtamney’s singing on the canal and the mesmerising whirls of Jonathan Nangle and Rory Tangney’s Loop Guiding for four-channel electronics and kinetic sculptures, heard in the Real Tennis Court.

Among the other memorable performances were the RTÉ Contempo Quartet’s handling of James MacMillan’s Memento and Deirdre McKay’s Mr Shah Stares to the Heavens, as well as another McKay piece, buttons, breath, bow, played by Concorde in a concert aimed at young ears to which, unfortunately, not very many young people showed up. Maybe next year!