The actor played Medea ‘many years ago’. Now she is directing Cherubini’s opera at Wexford Festival Opera – and rehearsals have become a journey of discovery 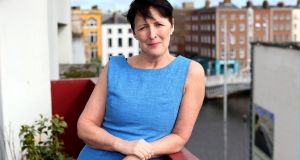 Fiona Shaw: “What we are trying to find is the opera behind the opera”

Driving across the bridge; the two Pugin steeples; in minutes we are swallowed by Wexford’s streets. The corridors of the opera house are filling up with young singers whose names I try to learn quickly, as they are the chorus members. I will have a few sessions with them and then not see them again for some weeks – terrifying.

Luigi Cherubini’s opera Medea begins with an overture, during which I hope to play out the original story using children. So I have cast some great local kids, not only to play Medea and Jason’s sons, but also a talented 10-year-old called Lucy to play the daughter of the maid Neris. I hope the absence of the boys from Medea’s life will be intensified by there still being a child in the house who is not hers.

We begin. I start with Medea and her maid Neris. One Norwegian; one Italian. Small steps.

Many years ago I played Medea. The story that spawned both the play and the opera is as much about ordinary life as it is about violent death. Medea is an immigrant and hopes, as any mother would, for the success of her marriage, for the joy of settling with her two sons. This makes her rejection by Jason very recognisable.

Perceived as a witch, she is also famous for having killed her brother to help Jason. This complicates our view of her. A woman who loved so much, she burnt her boats for her love. I have always thought when Jason leaves her, her reputation as a witch is idiotic. If she had such magical powers she could have made her husband stay.

I have cast her dead brother to appear in the show. He will “hover” like fate and guilt, drawing her back to that fatal mistake years before. He will live on a rock in her mind, in her sittingroom.

Today is one of the hardest days. Finally we have the chorus on stage to sort out a nine-minute sequence where they sing about the joys of marriage. Kim, the choreographer, has an idea about this group of 30 following Glauce under a table, willing her to be happy. My beanie-headed assistant Ella – who marks everything in the score, every twitch of a finger, every position of every person at every moment – is sick. Without her there, we are drawing on sand.

This week has been full of good days. To my relief the singers are all good actors. Raffaella Lupinacci is so moving as Neris the maid, who attempts to keep the deserted house running. Lise Davidsen, who sings Medea, has a voice that is blazoning itself on the world. Remarkably, she plays the anti-histrionic: a woman at home, miserable at being rejected by her husband and kicked out of town, threatened with death and robbed of her children.

In the interlude into act three, she wanders, looks out the window and we are pulled into her misery and confusion. The drama then is in the temperature being dropped so the arias soar. Music allows the scenes to deliver both the domestic world and the “giant epic world”, which is inside us all.

Medea poisons the wedding veil. This we have not modernised in the production. The magic conjures the powerful instinct in us all to react to pressure. Fear and hatred, revenge and loss turn us from civilised creatures to our instinctive selves. This was the warning of Euripides, highlighting the vulnerability of self-satisfied society when overriding nature. I must light this well.

The kids rehearse hiding as the parents fight. They tell me that they do not like the texture of the yogurt that they are asked to eat in the scene. Lucy says she would like to be killed in a play.

After the stage and orchestra rehearsal last night, Adam Lau, who plays the king Creon, is inspired by discoveries about his character, namely, religion and the fleece. The “fleece” remains for me anything gained with huge effort and ambition: Olympic medals, real estate, power, wealth. In the myth, it was stolen by a joint effort. But in divorce, Jason claims it and gives it as a gift to his new wife, Glauce. A swirl of jealousy – like a cyclone.

Ella and I have been sitting at lunch times scratching through the translations, one from the French and one from the Italian, to make sure the subtitles are palatable. How do you find modern words for witch: sorceress, perhaps? Or perfido, which sounds so pretentious as “perfidious man”? In the original it was something like the most “betraying knave”. Dirty rat? No!

When you make something, you must be as true to the moment it is written as to now. What we are trying to find is the opera behind the opera, the score that comes from performers’ interaction, which has to be as precise as music, once it’s found. But it does not exist until rehearsals begin. We have less time than Cherubini had.

This morning I went to the gym and hauled my legs on the cross-trainer. I look thinner but drawn. The last week of making an opera is very daunting and the enemy is time. Today none of the singers will rehearse; they are resting for tonight. And so the suggestions we want to make after last night’s rehearsal have to either be ignored for the moment, or discreetly suggested by visits to the dressing-room.

I creep along a corridor with my assistant Ella a half hour before, and ask one singer to look left before beginning his aria, because in a completely separate rehearsal I have asked a chorus member to turn right. This is typical of the blind blocks that have to link in opera-making. Thankfully, music is the glue and holds the precision of timing.

We light all day, trying to focus individuals in a sea of chorus, all of them moving parts.

To our surprise the conductor plays the national anthem at the orchestral run, just before curtain up, a tradition in Wexford. It reminds me of childhood.

The singers were incredible and maybe for the first time I can see the piece as a whole. The opera is in two pieces. It was written in 1797 and the first act centres on the terror of the new bride who is daring to marry Jason (we hint at its conception with 18th-century hen night costumes). You can feel the revolution in the panic of her aria and the plummet in despair, knowing that Medea, Jason’s wife, would ruin it.

Medea enters halfway through the first act, a woman, calm, asking her husband to come home. The complication of liking all the characters while hating their actions – underpinned by their magnificent music – makes for potentially very good theatre. This run is also the first time that the whole show is handed over to so many departments. Video, design, costume, technicians, painters, lighting, stage management: all can see what we are aiming for. Now we are all serving the show.

I meet the singers for notes. All of them are exhausted. I apologise for the last-minute adjustments. There is a point at which singers hate change, as they process everything into their bodies and timing. Kim Brandstrup, the choreographer, and I point out that music has its structure built in, whereas the structure of theatre-making happens very late. Suddenly, you see where the bolts must be tightened.

The rehearsal room, where we have spent weeks climbing on rocks, falling on beds, inventing, is now emptied of all the props that inspired us along the way. The past weeks were creative because Annemarie Woods, the designer, and I came with a series of ideas, a set design and costume design, and all of these are changed by the discovery of the opera through the singers.

They have brought to this their diverse and delightful personalities. Ruth Iniesta brings to Glauce, the worried bride, an energy that makes the terror funny. Sergey Romanovsky is the fittest tenor I’ve ever met (he’s a breakdancer in his spare time) and so an apt partner for Lise Davidsen, who is a profoundly still, soul-wrenching Medea. Because of them, I have been able to make the scenes entirely domestic. Each of them has played from their experience.

The public dress rehearsal is tomorrow. And we hear the biggest hurricane ever arrives in Wexford. Where are the gods now?