The original boss: the man who brought bossa nova to the masses 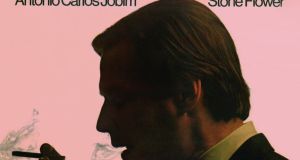 Talent doesn’t always take you straight to the top like an elevator. Sometimes even the exceptional artists need a little guidance about where to alight and when. Timing is a critical skill both inside and outside the studio.

The Brazilian master Antonio Carlos Jobim left an indelible mark on music but an American record producer by the name of Creed Taylor played a big part in his success at critical points. 1970’s Stone Flower was the apogee of their long collaboration together. It’s a rich testament to their achievements, striving in tandem for the lazy perfection, brothers in arms.

Taylor wasn’t typical of the moneyed types that populated the upper echelons of the booming American record industry of the 1950s and 1960s. He grew up in Bedford, Virginia, surrounded by country and bluegrass music. His passion for sound stretched in all directions.

His impact was on jazz but really he was a music nut who felt compelled to bring the best out of the people he believed in while paying little attention to the naysayers.

His great achievement of the 1950s was to find a home for John Coltrane at Impulse where he could freely express himself without interference.

In 1961, after a trip to Brazil, he persuaded Jobim to come to New York and there he set about shaping a new sound that would spark a nation’s love for bossa nova, a smooth intertwining of samba and jazz. Creed produced the Getz/Gilberto record that Jobim orchestrated in 1963.

This collaboration blew up like fireworks across the US, winning a Grammy and garnering the admiration of all the greats including Frank Sinatra, who quickly wanted in on the craze and recorded an album with Jobim in 1967 under the name Francis Albert, a nod to the sophistication of their endeavour.

By 1970, Creed recognised that the bossa nova bandwagon was beginning to lose some of its shine. He took control of production duties again and nudged Jobim back to his roots while couching him in a sound that was tender and sumptuous yet impeccably precise. Within this context Jobim shines like never before, taking to the piano and even humming a few of the delectable melodies. It feels so natural. Everything shimmers and flows like sparkles on a lazy river in high summer.