Jade Thirlwall on the band’s success, their new song and creating an album while isolating 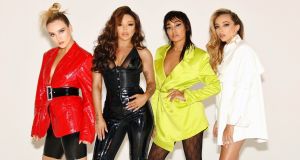 “Not too bad at the minute. I’m still working from home. Not bored yet. Keeping myself entertained so... yeah. Doing okay at the minute.”

Jade Thirlwall from Little Mix is on lockdown and, like the rest of us, every “how are you?” is asked and answered as honestly as possible. Using her kitchen table as an office desk, today’s tasks include social-media updates and promoting the group’s new single, Break Up Song. As the world is trying to get to grips with the Covid-19 pandemic, Thirlwall feels that now is the time for the return of pure pop music.

“There’s been a lot of going back and forwards about what to do with the single,” she says from her flat in London, where she is isolating with two of her friends. “We had a chat and decided that we still really wanted to go ahead with releasing Break Up Song because in these times, when everyone is stuck indoors, one of the best things to do is listen to music.”

I’ve been stuck in a bit of a rut because I’m not in love with anyone, I don’t have a boyfriend to sing about… I haven’t had a bad break up

This time last month, Little Mix were touring in South America, recording songs for their upcoming sixth album and filming Little Mix: The Search, a BBC series where they create and mentor new bands, but a question mark hangs over what happens next. “It’s definitely that fear of the unknown. It has literally never happened in our lifetime before,” she says, her Geordie accent hugging each word. “I feel like nobody really knows what the right thing to do is. It’s really strange. It’s like a movie.”

So what happens when a pandemic hits just as one of the biggest girl groups in the world is starting a new era? They keep going.

“I feel like we’re two thirds of the way there. We’ve got a lot of songs – enough to make an album – but we haven’t recorded them all yet,” says Thirlwall. “We’re such perfectionists so there’s always a lot of mixes before we go to the final product. Usually we have a lot of meetings to listen to every song we’ve written or songs that have come in. That’s when the disagreements happen, with who wants what on the album and stuff, so we haven’t got to that stage yet.

“Right now, we are finishing the songs that we have recorded, our A&R is emailing us with mixes and stuff and we can give notes back. We’re trying to finish as much as we can while we’re all indoors,” she says, explaining what they can do when they’re all separated. “Me and the girls have been sending choreography videos and things like that. Our minds are constantly buzzing. I don’t think people realise how much thought we put into everything we do. It very much stems from us and our ideas so at least now, I guess, we have a lot of time to get creative and think of other things that we want to do with this campaign.”

Thirlwall says that ideally she’d be writing more songs now because “there’s nothing else to do!” but creativity comes in waves. “I feel like at the minute I’ve been stuck in a bit of a rut because I’m not in love with anyone, I don’t have a boyfriend to sing about… I haven’t had a bad break up,” she jokes. “I’m sort of just in the flat like with me mates and I’m like, ‘Well, how can I make this a good song?’.”

The new era of Little Mix

When Thirlwall, Perrie Edwards, Leigh-Anne Pinnock and Jesy Nelson auditioned as solo acts in 2011 for the eighth series of The X Factor, the judges saw something in them and took a chance by putting four strangers together and forming a girl group. Under the mentorship of Tulisa Contostavlos, they won the series – the first group ever to do so – and landed a recording contract with Simon Cowell’s label Syco. While their 2018 album LM5 was the last to be released with Cowell, with all future releases coming out through RCA UK and Columbia Records, the Little Mix brand remains strong.

“This new era of Little Mix is very celebratory. We’ve been together nearly 10 years now and that in itself is a huge achievement; the fact that we’ve survived as a pop act and as a girl band for this long,” she says. “I think the last album was very female-empowerment heavy because... well, we always feel like that anyways but at the time, you know, we went through a lot career wise and we were feeling a bit bolshy and wanted to write about it. With this album, it’s more about writing great pop music.”

Does she feel that the importance and the escapism of pop music has been heightened lately? “Yeah, absolutely. I think bubblegum pop and pure pop music – what that is is anyone’s interpretation has taken a little bit of a backseat recently,” she says. “I feel like now is for pop music to really come through again, like fun, cheery pop. I’m always referencing the 2000s pop era of Britney and that sort of vibe because I absolutely love that kind of pop music.”

“When everyone is stuck indoors and might be feeling a bit down and stuff,  now is the time for us to really come through and to write good pop songs,” she says. “Just like good concepts about what’s going on in the world right now and how people get through it.”

Other ways of being creative

As things keep changing by the day – and sometimes by the hour – there’s a sense that Little Mix can only take things as they come. When a new album campaign is launched by a pop act, everything that comes with it – the press trail, the music videos, the live performances, the inevitable world tour – is big.

However, to contain the spread of the virus and staying sensitive to the fact that a global recession is quite likely, things have to be modest. “I think the beauty of social media and all these streaming platforms is that you don’t necessarily need to do a massive budget music video to do well with a song,” she says. “There’s other ways of being creative.”

Now that Break Up Song is out in the wild, the group remain busy online but Thirlwall says she’s been struggling with her TikTok content and technology.  “Gosh! I haven’t got the patience. I am really trying and I have got two friends here who are helping us do it. But yeah... everybody’s doing a bloody livestream, aren’t they?” she says, admiring how quickly we’re adapting. “I guess there’s nowt else to do. It’s nice for fans to see what’s going on in your home and what you get up to and stuff... They’ve never been fed so much to be honest!”

Just as she lightens the uncertainty of our new normal with jokes, Thirlwall says it will be business as usual with Little Mix.

“I think we have another song in the pipeline ready to go in the summer. We wouldn’t want to hold that one because of what’s happening and if we are still…” She pauses. “Well, that’s the thing. No one really knows what’s going on. If we are still in the same position we are now, I think it’s about not depriving fans of our music.”

Singing and dancing are gateways to happier times and in their roles as pop stars, Little Mix are doing what they can to make things feel normal. Lana Del Rey has a song called When the World Was at War We Kept Dancing and that seems to be the spirit that we should all hold onto. Whether it’s in bedroom mirrors or on kitchen tiles, just keep dancing.

“We’ve had this music for a while now,” she says with certainty, “and we want the world to hear it.”

What does theatre look like streamed directly into your home?
7

Radical Wordsworth: Focusing on the ‘spots of time’ of poet’s greatest work
8