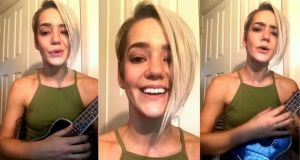 In the aftermath of the Brett Kavanaugh controversy, and on the eve of International Day of the Girl, a parody song about what a frightening moment this is for men feels timely.

Lynzy Lab Stewart, a Texan singer, has gone viral with her satirical song A Scary Time, in which she sings beautifully, accompanied by her ukulele, about how difficult it is to be male at the moment.

Inspired by Donald Trump’s remark that this is a “very scary time for young men in America”, and already viewed almost 10 million times, it has been praised by men such as Mark Ruffalo and Matthew Modine and by women such as Patricia Arquette and Alyssa Milano.

Lab, who was also a principal at Houston Metropolitan Dance Company, and has taught dance at Texas State University, smiles sweetly as she juxtaposes all the things women feel scared to do with a catchy chorus about how “it sure is a scary time for boys”.

“Yeah gentlemen! Band together, make some noise. It’s really tough when your reputation’s on the line and any woman you assaulted could turn up at any time.”

The verses are a list of things that some women and girls are genuinely scared to do or struggle with because of their gender.

“I can’t walk to my car late at night while on the phone. I can’t open up my windows when I’m home alone. I can’t go to the bar without a chaperone. I can’t wear a miniskirt if it’s the only one I own. I can’t use public transportation after 7pm. I can’t be brutally honest when you slide into my DMs. I can’t go to the club just to dance with my friends, and I can’t ever leave my drink unattended.”

“I can’t jog around the city with headphones on my ears, I can’t speak out against my rapist after 35 years,” she sings, alluding to the allegations made against Brett Kavanaugh, the newest justice on the United States supreme court, by Christine Blasey Ford.

Another chorus rams her point home: “But it sure is a scary time for boys. Can’t speak to any woman or look her in the eyes. It’s so confusing. Is it rape or is it just being nice? So inconvenient that you even have to think twice.”

Then she sings: “I can’t live in an apartment if it’s on the first floor. I can’t be wearing silk pyjamas when I answer the door. I can’t have another drink even if I want more. And I can’t make you feel invalid or obscene or ignored. I can’t jog around the city with headphones on my ears.

“I can’t speak out against my rapist after 35 years. I can’t be taken seriously if I’m holding back tears. And I can’t ever speak earnestly about all these fears. Cause it sure is a scary time for dudes. Can’t text a girl repeatedly, asking for nudes. Can’t make a girl have sex when she’s not in the mood. And what gives her the right to give you attitude?

“Yeah, it sure is a scary time for men. Girls like to act like you’re to blame and they’re the victim. Her dress was short and she was drunk. She’s not so innocent. Thank God your dad’s a judge and you won’t be convicted.

Lab’s song ends with the fake realisation that maybe it’s not in fact men who are having a scary time, and she urges people to vote in the US midterm elections.

Men, she sings, have “always had the upper hand, they’ve always had a choice. It’s time for women to rise up, use our collective voice, the day to vote is November 6th, so let’s go make some noise.”

It may indeed be a scary time, but this song has made millions smile while making a very serious point.