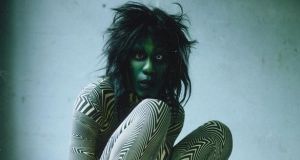 Yves Tumor has shown a gift for world-building experimental productions that could go on to influence others.

New artist of the week: Yves Tumor
Plus songs you have to hear from Jaakko Eino Kalevi and Claire Laffu
What: Eclectic experimental producer
Where: Tennessee
Why: To be an enigma in this modern world of influencers, Insta story confessionals, Twitter spats and Kanye memes means to remain below the fold and do your thing. Not that the music of Yves Tumor is ever likely to make a dent directly in pop culture but over a series of wildly diverging releases, the American musician has shown a gift for world-building experimental productions that could go on to influence others who will.

His otherworldly output is augmented by social media clips that take their references from the work of Kenneth Anger. His work can be brittle, soulful, abrasive, ambient, punk, caustic, sweet and rarely disengaging.

2016’s track The Feeling When You Walk Away is a twilit soul jam full of warmth drawn from a guitar sample that repeats throughout its formless three minutes and served for many as an introduction into Yves Tumor’s imaginative style, as heard on the debut album Serpent Music.

That release was brimming with ideas that didn’t always land and for 2018’s Safe In The Hands Of Love, Yves Tumor has hit upon a thrilling alchemic vitality that has taken his music into surprising territory. On its own terms, the album released on Warp Records is largely a dark melodic pop record with mixtape aesthetics. The album is teeming not only with variation but with vocals. The trip takes you through the Caribou-esque breakbeat pop of Noid, the trap beat low-end hip-hop of Honesty, the trip-hop lull of Licking An Orchid and through the chillwave of All The Love We Have Now.

It’s a thrill-ride of experimentalism and musicianship, like being pulled through a series of black holes to find yourself in a new strangely familiar place each time. It’s one of the most untethered albums of the year.

The Paris-based Belgian model and singer Claire Laffut lights up the room with a French chanson-inspired big playful pop song. Not only is the song one for your playlists, it’s a starting point for a showcase of Laffut’s other creative outlets - a brilliant choreographed video and a painting created in response to the song, both by the artist herself.

Jaakko Eino Kalevi - People In The Centre Of The City

The Norwegian alternative artist Kalevi has made a reputation for himself with smooth 1980s-inspired pop music. A song inspired by the artist’s time as a tram driver in Helsinki, the track is the perfect soundtrack to a metropolis in motion. Kalevi’s Out Of Touch album arrives with a green light on October 12th.

The real Sound of Music: Maria was no flibbertigibbet, and she didn’t teach the kids songs
6