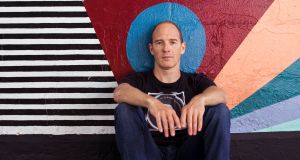 Dan Snaith’s music has brought him plenty of unexpected moments over the years, but soundtracking a gay kiss on one of TV’s biggest soaps is a new one. A few days before we speak, the Caribou track Can’t Do Without You musically enhanced a smooch between two characters on EastEnders – leading legions of fans to alert the Canadian musician on social media.

“People were very excited about it,” he laughs. “It means a lot to me. Obviously it’s not the first gay kiss on EastEnders, but it’s still a moment for the LGBT community. Funnily enough, when the song Our Love came out, I guess it must have been around the time that gay marriage was legalised in Ireland – and I had people telling me that song was being played at parades, events, parties celebrating that moment. It’s really beautiful to have my music be somehow tangentially linked to something meaningful in that way.”

Snaith, speaking from the basement studio in the London home he shares with his wife and two young daughters, has had to adjust his expectations in recent years. Since the release of his third album, 2010’s Swim, audiences have embraced his kaleidoscopic, emotional electronica in droves, propelling him from cult favourite to something knocking on the mainstream’s front door.

“The beautiful thing about EastEnders is that it’s so mass cultural; it’s like this institution,” he says. “My conception of my music when I originally started releasing it was, ‘Well, I’m a music nerd, so the music I make is probably only going to appeal to the type of person who’s similarly obsessed with music,’ etc, etc. And I haven’t made compromises or concessions to make the music more palatable – and I don’t think I’m Taylor Swift, or anything – but somehow, it’s moved into the mainstream, to a certain degree. And it’s been really cool to see that happen.”

His basement studio is where he cooked up his latest album Suddenly, the follow-up to 2014’s Our Love. It sees him return to the Caribou moniker after two releases under his house-music-oriented alter ego, Daphni.

“Daphni served a very specific purpose; it was music for clubs, music to play in my DJ sets,” he explains. “But Caribou is just like a baseline, something that’s always happening; it’s kind of like a musical diary or a photo album of my life. It’s kind of always bubbling along, it’s so integrated into my life. Everything, musically and personally, ends up in Caribou.”

That meant that he had a lot of ideas and fragments of songs to choose from for Suddenly – 900 of them, in fact.

“It’s ridiculous,” he laughs. “It sounds like a big number that I just made up, but there literally is a playlist on my computer with 900 bits of music on it, and there are 12 tracks on the album. It’s like the most wasteful, inefficient process you could possibly imagine. But when the kids go to school, I come down here every morning – because it’s fun and I enjoy it and I like the spontaneity – and I make something, a little loop, or whatever. And if I do that every day, over the course of intervening years they pile up and it easily becomes several hundred. But the thing that I love about that part of the process is that the critical part of my brain is turned off; the part of my brain that’s like: ‘This is going to be part of an album – is it good, is it not good?’ I don’t worry about any of those things. I’m just completely free to do whatever I want. I think it’s important to be free to not be constrained by people’s expectations.”

He admits that he had some help narrowing those ideas down, in the form of two regular sounding boards. One of them was his wife; the other was his good friend Kieran Hebden, aka Four Tet.

“They’re both brutally honest, that’s the crucial thing – they’re not afraid to tell me that what I’m working on is worth finishing or pursuing,” he explains. “So without their perspective, I think I’d have a very hard time getting to the finished thing amidst the jumble of ideas.”

When it came to Suddenly, Snaith says that he didn’t want to repeat what had come before, despite his success with that formula. As a result, this album takes more unexpected twists and turns, surprising the listener at various points rather than beckoning them in and allowing them to sink into the song, as much of his previous fare has done. This time, he says, it was about “accentuating the edges”.

“Our Love was maybe the most distilled, shiny, polished, concise version of my music that I’ve ever made – certainly to that point,” he says. “Every rough edge was kind of smoothed down. And that really appealed to me: what would my music sound like if it had as much of a pop formulation that I could possibly manifest, without compromising essential things about it? But coming back to it this time, the only thought that I had in the beginning was: ‘I can’t push that idea any further. I can’t make it more glossy and shiny and poppy; it’ll lose something essential if I do.’ And also, realising that chasing another Can’t Do Without You was a trap.

“So I was like: ‘Okay, what are the things I love about music, and the things about the way that I make music?’ Rather than smoothing down those rough edges, let’s accentuate them and see what happens.”

The music echoed the emotional disorder of his life at the time after his brother-in-law passed away after suffering a heart attack. You and I was written about the FaceTime call that he and his wife received from her parents, breaking the news.

“I have been very fortunate in my life; I had a very stable, happy childhood and [a] young adulthood that was very much happy,” he says. “In the last five years, however, there’s been all sorts of massive surprises and tragic events, and a lot of them have shaped the record this time more than anything else.

He agrees that Suddenly is his most personal and vulnerable album to date, something which was difficult to accept at first. “It’s definitely the most unguarded and vulnerable and intimate album I’ve done. To some degree, it’s been therapeutic for me, to be processing these things through making music. But some of the songs, I’d think: ‘This is too vulnerable, this is too close – I’m never gonna share this with people, I’m gonna make it for myself.’ But then those songs were the ones that I kept coming back to, hearing that they had some emotional resonance. And ultimately, those are the things that I think are most relevant and valuable to share.”

There have also been some happy moments in recent years, and the album is certainly not morose or overwhelmingly melancholic. The sense of support and of nurturing people is evident throughout, and the birth of his second daughter, now three, was one of those joyful life events. He laughs as he explains how she’s more interested in spinning on the studio chair than she is in hearing what daddy’s been working on. Her eight-year-old sister, meanwhile, has big plans for this release. “She told me the other day that her favourite track on the album is Home, and she feels like that will be my most successful track ever – which is a hilariously business-minded thing for an eight-year-old to say.”

Snaith had previously described Our Love as being like a “sibling” to Swim. This album, he says, “feels both new and different; there are lots of things that have not been in my music before. But it also feels like a kind of summation, in a lot of ways. There are tracks on there, like Magpie, that could have been on any of my albums – and some sounds that refer back to music that I made a long time ago. But it still feels like I’m not retreading old territory; it just kind of references or rhymes with some of those things from the past.”

In any case, he has faith that his audience will respond to Suddenly – and maybe some EastEnders fans will also come along for the ride. And if they don’t, that’s fine, too.

“There’s plenty of formulaic pop music out there, as per always – but we also live in a time when a lot of pop music is really challenging and interesting,” he says. “For me, I see myself as a bit of a musical weirdo, an outsider, in that sense.” He chuckles to himself, perfectly happy with that label. “So if people are up for something unusual, that’s really liberating and exciting.”