The Cork artist and his partner, Éadaoin O’Donoghue, have written a new opera, Deirdre and the Sons of Usna 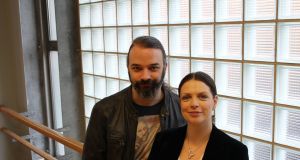 John O’Brien and Éadaoin O’Donoghue: ‘We wanted to go into that Irish mythological provenance and produce something bold and daring, to write an Irish operatic epic,’ says O’Donoghue

When John O’Brien suggests that penury is a kind of opportunity for the artist, he’s not arguing for an intentional restriction of funding resources. Although others working with him in Cork might (and do) have a slightly different attitude, O’Brien himself is merely explaining how so much of what is regarded as his innovative and imaginative style in music and theatre is sometimes among the few benefits of finite resources.

“One of the things about working in Ireland is that there’s not enough money for timely use,” he says. “There’s no dynamic of proper financial infrastructure allowing for forward planning. But there are choices where I can place myself, in design, directing, composing, conducting, I can fit into the separations between the different elements which make up the whole. I can place myself in a middle ground, working almost like an editor.”

An immediate example of O’Brien’s fluent methodology will be the presentation of the new opera Deirdre and the Sons of Usna at The Everyman on January 28th. It is intended that this concert co-production with Everyman, for which he has written the score to a libretto by Éadaoin O’Donoghue, will be developed as a full orchestral production in 2021. And it’s obvious that for O’Brien the middle ground provides a bridge between disciplines and opportunities, from opera to theatre, from orchestras to ensembles, from – as with the Cork Proms coming in June – a symphonic stretch of Beethoven to The Beatles.

Also this year, he and the Everyman co-produce the Sea Opera Trilogy , a touring production enabled by an Arts Council grant of €290,000 for the three-act combination of Vaughan Williams’s setting of Riders to the Sea by JM Synge directed by O’Brien, the premiere of Irene Buckley’s Lament for Art O’Leary directed by Sophie Motley, and the premiere of Coiscéim, the ancient reflection on exile attributed somewhat tentatively to Colmcille and directed by choreographer Philip Connaughton to O’Brien’s score. The trilogy is to visit Galway, Tallaght and Wexford after its opening in Cork in May.

What may be problematic in this productivity is that it is happening under the radar of wider attention. Reference might be made to O’Brien’s work in Right Here, Right Now at the Cork Opera House next month. The somewhat Beckettian title is a pointer to what is available here and now with this year’s concerts featuring, among others, Mick Flannery and Dónal Lunny and the Cork Opera House orchestra.

“That’s a kind of mad thing, the orchestra,” says O’Brien of the weighty reputations under his baton. “We’ve never had a professional orchestra here, although we have many professional musicians. I think the original idea was from Eileen Gleeson, who as CEO of the Opera House was very conscious that no opera was being produced in the city at all. We also discussed it with Deirdre Long of the Cork Operatic Society because we believed that although everything to do with professional opera was being centralised again in Dublin, we could try a different approach with concerts. No sets or costumes, no weeks of rehearsals, but able to provide a chorus and musicians and to bring in brilliant singers who could just turn up.”

They did turn up, and found an orchestra of instrumentalists living and working in Cork as teachers or freelance performers, or living elsewhere but willing to return when definite engagements made it worthwhile. That was a start. Now, caught before heading off to New York, Philip Connaughton has no doubts.

“John O’Brien is a very important addition to theatre-making in this country. Most of my work in opera has been with him. I’m working more and more in Cork and the sense is that we want to go back again and again; there is that strong feeling of continuity, of working with several of the same people over a period of time, appreciating the ridiculous amount of talent, sharing the determination to get things done even though there’s not enough money and not enough time. I absolutely love it.”

For percussionist Alex Petcu, this could grow a long-desired professional orchestra for the city. “Also, it’s great for graduates of the CIT Cork School of Music to know that there will be somewhere here where they can work. John seems to be looking for people with a style of their own as opposed to being content to do what they’re told. But it’s not really informal, the way we work together, there’s a discipline of wanting to play your best because all the others are playing their best.”

These are accomplished and experienced performers: Connaughton with his international scope; Alan Smale, retired leader of the NSO as leader of the Opera House Concert Orchestra; and a core group including Petcu, Marja Gaynor, Majella Cullagh, Ciara Moroney, Kim Sheehan and Julian Tovey to name only a few.

Speaking from the buzz of a good year at Everyman, artistic director Julie Kelleher believes that the decision to put resources into staging concert performances of new operatic work intended for further development is beginning to show results. It’s still a long haul, made no easier by having to apply for funding year by year rather than being able to make long-term plans.

“All the same, we’re making them because Everyman is looking at how it can grow as a promoter of new work by Irish composers, especially after last year’s successful production of The Nightingale and the Rose, with O’Brien directing his own score to Éadaoin O’Donoghue’s libretto.”

Partners in personal as well as professional life, O’Brien and O’Donoghue collaborate again for Deirdre. Such an immersion in Irish legend was surely something of a leap for O’Donoghue, a graduate of the Jacques Lecoq International School in Paris?

“It’s certainly a leap from there to Irish myth in music, but it gave me a vocabulary of creativity and of construction for the theatre,” she says. “What I can bring to opera is a sense of excitement in mixing theatricality with music. It’s important to take those leaps, to have an appetite for adventure.”

Currently artist-in-residence with Corcadorca, she adds that Deirdre is a story which has been part of Ireland’s cultural DNA almost since the Iron Age. “We wanted to go into that Irish mythological provenance and produce something bold and daring, to write an Irish operatic epic.”

Its epic future may depend on Everyman’s support of an Opera Friends organisation charged initially with finding a commission fee for a large-scale presentation of Deirdre. As with so much else, O’Brien is philosophical.

“We don’t have a recent history of musical philanthropy in Cork, so we’re building that. We have a beautiful camaraderie among the players now and I think there’s a pride in making something which will be sustainable into the future, rather than on a gig-to-gig basis.”

The gigs, however, are becoming programmes for O’Brien, with three opera concerts for the Opera House from February to November, the Sea Opera Trilogy in May, the Proms for the Midsummer Festival in June, work as piano accompanist for Karen Underwood and as musical director for Chitty Chitty Bang Bang at the Opera House from July to September. There’s a hint of life’s rich tapestry in this schedule, but music in all its variations from the classics to the contemporary is the motivator for O’Brien.

“My job is my life. I’m a musical theatre-maker, I’ve always been about making things that move people.”

Reflecting on the forthcoming Sea Trilogy and on Coiscéim, O’Brien believes that the experiences of people who live on this island are expressed in terms of the land or the sea. He’s interested too in hearing how Vaughan Williams’s arrangement of Synge’s play will sound in Irish voices. As for Beethoven, “I’m excited about that. The big classics are big for a reason and those symphonies sound really operatic to me; they’re not intimate, they’re huge dramatic statements. I feel connected to that world.”

Kelleher describes O’Brien’s influence on both the Everyman and the Opera House as “pretty singular”, although “there’s nothing of the tortured auteur about him. He’s deeply passionate about the work and his emphasis is always on collaboration rather than hierarchical structures. But basically it’s about the music. People come to the theatre to be moved, and time and again he delivers on that expectation.”