The band that defined Britpop with Alright, Richard III and Strange Ones have reformed 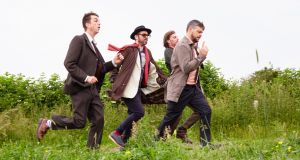 Pumping on your stereo once more: Supergrass have released a new boxset, The Strange Ones 1994-2008, and are playing two sold-out shows in the Olympia

25 years since they appeared as modern-day Monkees, and 10 years since their split, Supergrass are back – though, given the ubiquity of their zany, fun songs, did they ever really go away? As part of their reunion tour, the Oxford trio sold out their forthcoming Dublin Olympia shows in double-quick time, and they’re set to be a biggie on this year’s festival circuit too.

Coinciding with the live dates, The Strange Ones 1994-2008 boxset compiles more than 200 Supergrass tracks that helped define the Britpop era, including 14 live songs from their 1996 show at the RDS Arena, Dublin, supporting Blur. To help old fans brush up on their repertoire and direct newcomers on where to begin, frontman Gaz Coombes talks us through his 10 highlights.

Caught by the Fuzz
Supergrass’s first ever release, Caught by the Fuzz began as they meant to go on, with their boundless energy, springy melodies and wicked sense of humour already fully-formed. “It was one of the first five or six tracks that we ever recorded, back in 1993,” recalls Coombes. “As soon as we started writing Caught by the Fuzz in particular, we knew we were onto something.”

“Around that time, loads of teenagers would get picked up by the police for minor things. It was almost a rite of passage,” says Coombes. “It was such a quick song to write, and soon as we started singing the lyrics with the chords, we knew we had something exciting and funny.”

Alright
Supergrass’s first international release, it entered the top 10 in Ireland and marked them out as Britpop heavyweights, especially with its corresponding video on high rotation on MTV (when MTV mattered). It remains their highest-charting single globally.

“It’s a great track, but I still hold on to the feeling of when we wrote it, and the intention we had for it,” says Coombes. “Since then, it’s been taken over. It belongs to everyone else now, and that changes the feel of the song.

“It was a funny, weird track when we wrote it down the pub. We were 13 or 14, discovering the world and finding out about danger and love. It grew to become this crazy beast, but we’re lucky to have a track that was so life-changing.”

Time
Back when double-A-side singles were often in play (to promote both tracks equally, in theory), Time was released with Alright. “I remember writing Time when I was working at a restaurant, washing up and mopping floors. I had a late shift one Friday night, and came back at 1am to a party at my house – my girlfriend and my brothers were there with a few mates. I was done in and I couldn’t get into it, and I was pissed off they were having so much fun, so I sat with a guitar in a quiet room and wrote the chords to Time. That was kind of cool.

“We include a live version from the RDS Arena in Dublin, but I don’t really remember the show – all the gigs blur into one now. But whenever we went there, it was always a riot. It was always a special place to be, and will be in February.”

Sofa (Of My Lethargy)
A slow-tempo album track from their debut I Should Coco, “this song always excited me because it was a little different to what was on the rest of the first album,” says Coombes. “I’ve always felt close to it. It has a certain poise and laid-back coolness about it, so it’s a stand-out track for me.

“It was written in the studio when we were recording the album. On the piano, I slowed down the chords to Alright by four times, and gently played them. Then the melody came along. So in a weird way, Alright gave birth to another song.”

Strange Ones
An idiosyncratic album track on their debut I Should Coco, a B-side to Caught by the Fuzz, and now the title of their comprehensive box set, Strange Ones “was one of my favourite early songs”, says Coombes. “I like the way the time changes and goes from a standard beat to a 3/4. It’s a strange song but we made it work.

“A lot of the early songs were about being out in Oxford, doing too many drugs and hanging out with odd artists, drug dealers, students and people who were living rough. We were young and latched on to this odd community of people with different backgrounds. I remember that part of our lives really well – they were good times.”

Richard III
The lead track from Supergrass’s second album In It for the Money, it heralded a more mature sound, and came with a monster-sized riff that redefined the band’s parameters.

“There was a big shift in our writing between I Should Coco and this,” says Coombes. “I’d been listening to a lot of Iggy Pop and The Stooges, and I was really into riffs. So I wrote a riff, we put it to a drum beat on a four-track cassette recorder, and that was the demo. It became a new sound for us – there was more swagger and less speed-induced chaos.

“I Should Coco was such a big record that there was always going to be pressure to continue it. But Going Out preceded In It for the Money, and it suggested people were receptive to that more expansive sound.”

Their boldness worked: Richard III reached number two on the UK singles charts, kept off the top spot by R Kelly’s I Believe I Can Fly.

“That’s a mad track that, again, we wrote in the studio,” says Coombes. “The three of us got into the live room to do this odd, guttural beatboxing, and we’d catch each others’ eye and crack up with laughter. It took three or four hours to get it right. There’s a brilliant outtake called Sometimes We’re Very Sad, which is the audio of us not being able to finish a take. If you can find it, it’s worth a listen.”

Late in the Day
The last track released from In It for the Money, it showed a more contemplative side to the band’s developed sound. “Danny [Goffey] had written these verse chords that we thought had a good vibe – it sounded a bit like Neil Young,” Coombes explains. “I wrote the chorus to go with Danny’s verse, and it came together nicely. I mostly remember being in the studio, the Sawmills in Cornwall, and doing the middle eight in 10 minutes on the piano. That was the last piece of the puzzle.

“It was a fun video too,” he says of the pogo-heavy clip. “People seem to love watching it.”

We Still Need More
We Still Need More was originally released in 1997 as a B-side to Late in the Day, but the song gained profile as the lead track in the US movie Dead Man on Campus. “We ended up doing a video for it, based around elements of the film,” says Coombes. “It was bonkers how it shifted from being a little B-side to something much bigger.

“We always love doing B-sides because we got into the studio and created songs pressure-free. We could experiment and be expressive without it needing to produce a single or something that had a huge impact.”

Grace
Taken from Life on Other Planets, the track was written spontaneously in the studio, and named after the daughter of studio owner Chris Difford (of Squeeze fame). “His daughters would come in to see us, and bring us cups of teas. One day Grace came into the control room shaking this pot of money because she was collecting for charity. So Danny jumped on the piano and started singing the lyric ‘Grace, save your money for the children’. I like that inspiration can come from anywhere.”