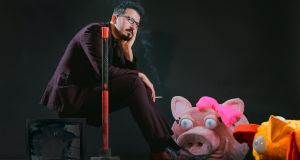 Bob Gallagher: “When you follow your own instincts – no matter how weird or obtuse – then you attract the right people and the right jobs.” Photograph: Colum O’Dwyer

Bob Gallagher is the music video director and the creator of these distilled ideas as brought to life in music videos for Girl Band, Myles Manley, SOAK, Saint Sister, Le Galaxie, Participant and Naoise Roo among others.

Gallagher has made a name for himself, through his narrative-lead, and often surreal work. His videos have the best properties of artful examples of the form: they place the viewer in a parallel world, they are transportive and enhance the song they are intended to promote.

“My first memory of using a VHS camera was filming myself lip-syncing My Heart Will Go On by Celine Dion,” says Gallagher, so perhaps it was inevitable he would work primarily in music videos. Mick O’Neill, a religion teacher in secondary school who loved Italian cinema and Scorsese was encouraging to Gallagher. As was the nurturing Auntie Bridie, who let him stay up late to watch westerns, encouraged him and showed him how to wield a camcorder.

His love of narrative in videos comes from his background as a filmmaker first, making short films. Gallagher has a degree in film from IADT and did a one-year course in darkroom photography. Growing up in the 1990s, when directors such as Jonathan Glazer, Spike Jonze and Michel Gondry were making groundbreaking videos, he remembers the video for REM’s Losing My Religion as a big inspiration.

“It opened my eyes to the idea of not viewing in literal terms but having images resonate with you in a powerful abstract way. It seemed to speak in the visual language of the subconscious, which appealed to me even as a kid.”

Dark reputation
Gallagher’s own work has been called dark or weird. The mortuary-set video for Girl Band’s Why They Hide Their Bodies Under My Garage is certainly gruesome and a little disturbing, as any well-executed video with a reanimated corpse would be, but Gallagher doesn’t see it as a bad thing.

“I feel like any weirdness that’s channeled into my work is actually a healthy thing since I get to explore and purge myself of subject matter. I don’t employ a therapist, so my work seems to have become a substitute.”

“It came at the end of a month of being severely depressed. Your barometer for pride be-comes quite variable. It was an achievement at some points to be leaving the house. I was proud of being able to use that project as a transformative personal experience.”

Sympathetic art
Girl Band have been one of his most frequent collaborators (with four videos so far) and they trust him to do the job.

“I’m told the system is that Al reads out the treatment aloud in rehearsal, and if everyone laughs, then the idea gets the go-ahead,” says Gallagher.

“I really like the challenge of making something that can be yours but is also representative of another artist. Music video is a very sympathetic art form because you have to serve the music.”

Gallagher’s recent recognition has meant he now has an agent in London, which can mean pitching on videos to managers and agents representing the artist rather than talking to the musicians directly.

“It can be a bit frustrating because you spend time writing, and you make the video in your head, but then it just ends there,” he says of pitches that don’t land. “I write very specifically to the track so it’s not the kind of situation where I have much scope to recycle ideas.”

Budgetary constraints
The flipside of working more directly with artists is that they are generally independent and don’t have a lot of money to offer. Gallagher is up for the challenge but it sometimes means he doesn’t pay himself.

“It’s more important to me to have the right gimp mask or whatever for the shot,” he says, while crediting the talented and committed crew who work on his videos, including cinematographer Deirdre O’Toole.

Though those “no-budget” videos are ones he’s most proud of – “Participant’s Shelter was made for the price of a raincoat and a bus to West Cork and that’s still one of my favourite videos” – he makes sure the cast and crew are covered on bigger productions.

“It’s definitely possible to make money doing it as a director for hire, doing more commercial work. The route I’ve gone, I’m more inclined to hold off for the right artist or track and let the projects come about a bit more naturally.”

While Gallagher, like many music video directors, has ambitions beyond the form (an hour-long TV documentary is in the works and he’d ultimately love to work on a feature-length drama), the reality of working in a field with little money on offer means doing odd jobs “getting paid €50 to hang Halloween decorations from a fire escape,” to shooting and editing other projects.

“It’s easy to get into a frenzy of working all the time but emerging with very little to show for it in creative industries and in my case, I was making myself sick. It’s good to be considered and get rid of that fear of saying no that plagues you. It took me a while to learn that I have to place the right value on my time, and also to be wary of people who take advantage of you for ‘creative work’.

“You lose out on jobs and work a bit less, but it’s more satisfying to work a little bit, get paid properly for it and have more free time and energy to concentrate on what you want to do. A good rule of thumb is the more bored you will be by a job the more you should be charging the people boring you.”

This year, Gallagher will travel to Cuba to study make a film in 10 days with acclaimed director Werner Herzog (“It’s a bit of a voyage into the unknown. No better guide!”), he has a documentary about immigration coming, and he’s currently working on a video for James Vincent McMorrow.

Gallagher believes in pleasing his own creativity first and offers this learned advice for budding filmmakers.

“I think when you follow your own instincts – no matter how weird or obtuse – then you attract the right people and the right jobs that are suited to you. When you try to please other people it never works out as well. I went on a trip to London to try and find an agent and it was really unsuccessful. I met with Geoff Travis from Rough Trade for advice and he told me it’s best to wait for the person who comes to you because they like what you do, and he was absolutely right. Concentrate on your work, be honest in what you’re doing, and let everything else happen around that.”