It’s a Dirrty job, but Xtina’s gonna do it: This week’s best rock and pop gigs 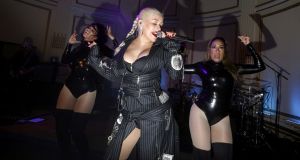 JOSHUA BURNSIDE
Lost Lane, Dublin
Belfast’s Joshua Burnside’s music has geo-political hints – and you can’t say that about many singer-songwriters. His debut album, Ephrata – the winner of the Northern Ireland Music Prize Best Album 2017 – was written in South America (mostly in Colombia), while the song themes referenced, among others, political activists such as Bogotá-born politician/activist Jaime Garzón. Running in parallel with Burnside’s charged topics are reference points that include Tom Waits and Nick Drake. In other words? You’re in for a sequence of treats. TCL

MARY GAUTHIER
Whelan’s, Dublin
Multi-award nominated New Orleans folk singer Mary Gauthier has been running around the houses for almost 40 years. Using her personal experience of troubled early adulthood years (she celebrated her 18th birthday in a prison cell) for a sequence of  albums, Gauthier has easily confirmed her status as one of the best folk/Americana songwriters of the past 25 years. Her most recent album – last year’s Rifles & Rosary Beads – is a collaboration between her and US military combat veterans, and has been described by the Los Angeles Times as “songs [that] reach to the deepest, darkest corners of human experience.” TCL

THE UNTHANKS: THE EMILY BRONTË SONG CYCLE
National Concert Hall, Dublin
North of England’s The Unthanks continue to mark our cards with yet another smartly themed sequence of songs. Commissioned by the Brontë Society over a year ago to celebrate Emily Brontë’s 200th birthday (she was born July 30th, 1818), songwriter Adrian McNally was tasked with turning 10 of her poems into songs. Utilising the group’s already acclaimed style of oral history folk music, McNally and sisters Rachel and Becky Unthank delivered the album, Shall Earth No More Inspire Thee. Expect an evocative evening of Brontë’s work interspersed with other back catalogue songs. TCL

GRETA VAN FLEET
Olympia Theatre, Dublin
It didn’t take Michigan rock band Greta Van Fleet long to rise above the average. From their formation seven years ago, the band members (brothers Josh, Jake and Sam Kiszka, and Danny Wagner) have quickly established themselves as one of America’s most successful contemporary rock acts. In other words, if you’re into music that evoke memories of classic UK rock groups such as Led Zeppelin and The Who, then you know where to be tonight. That is, if you have a ticket – this show sold out months ago. TCL

TROPICAL F**K STORM
Whelan’s, Dublin
Australia’s TFS (that settles the asterisk issue) developed from the demise of art-punk/psych band The Drones. Although officially on hiatus, Drones members Gareth Liddiard and Fiona Kitschin decided on a creative reboot, co-founding TFS during the summer of 2017. The resultant acclaim bestowed upon their 2018 debut album (A Laughing Death in Meatspace) and this year’s Braindrops is such that anyone into (as Paste magazine reckons) “watching a sped-up timeline of rising sea levels and melting glaciers set to long-lost field recordings of maximalist noise-rock from the Outback” will want to be a member of the audience. TCL

FRIENDLY FIRES
The Academy, Dublin
When they were once a mainstay of the indie-pop scene explosion of the early 2000s, Friendly Fires took an eight-year break between 2011’s Pala and this year’s Inflorescent. At the peak of their career, frontman Ed MacFarlane experienced a burnout and, very luckily, his team and bandmates recognised this and decided that they could take the time to recuperate. Now that they’re back with their third album, there’s a new lease of life with the English trio. This is more than a return to form. LB

MARC REBILLET
Vicar Street, Dublin
When Marc Rebillet played Dublin’s now-demolished Tivoli Theatre earlier this year, the social media posts from all attending ignited a strong dose of FOMO for all watching from their phones. The experimental performer promises that no two shows are the same as he regularly improvises onstage with songs that were originally made up on the spot when he recorded them.  Dublin (Airport), taken from his 2019 album Europe, is a clear indicator of what to expect. Fight the FOMO and be part of the mayhem. LB

CHRISTINA AGUILERA
3Arena, Dublin
The amount of awards that NYC-born Christina Aguilera has nabbed is impressive. From six Grammies (including one Latin) and a star on the Hollywood Walk of Fame to being included on Rolling Stone’s list of the 100 Greatest Singers of All Time, Aguilera has barely enough space on her shelves to hold all of them. She has been a pop star since the age of 18, and 20 years later shows no sign of relinquishing her tight grip on success. Following a brief sporadic residency in Las Vegas, she continues with her X Tour, which is in support of her eighth studio album, Liberation. Advance reports of the live shows criticise the many costume changes and numerous song medleys rather than finished tunes, but reckon that Aguilera’s voice remains a thing of wonder. Word to the wise: doors open at 6.30pm. TCL

JOJO SIWA
3Arena, Dublin (Also Thursday 7, same venue)
If you’re in any way familiar with Jojo Siwa, the fact that she’s playing a venue as large as the 3Arena is either a massive shock or totally understandable. If you don’t know, here are the cliff notes on this new-age celeb. The 16-year-old first found fame through Abby’s Ultimate Dance Competition and Dance Moms, but now she mostly trades as a Nickelodeon star, a singer and a social media influencer who has two (almost) sold-out shows in Ireland’s biggest music venue. LB

WHENYOUNG
The Button Factory, Dublin (Also Friday 8, Cyprus Avenue, Cork; Saturday 9, Dolan’s, Limerick; Sunday 10, Róisín Dubh, Galway)
With Pillow Queens putting a modern twist on 90s surfpop and Just Mustard taking on shoegaze, Limerick trio Whenyoung are fawning for the romantic indie pop that the likes of Friendly Fires and The Naked and Famous nailed. Not nearly enough noise has been made about their debut album, Reasons to Dream, a beautifully hopeful collection of tunes. So here it is: listen to the bloody album and see ’em live. LB

THE TALLEST MAN ON EARTH
Vicar Street, Dublin
Sweden’s Kristian Matsson’s chosen performing name may needlessly brag (he is 1.7m/5ft 7in in height) but his songs bring such claims down to zero. Initially influenced by Appalachian music (particularly that of Kentucky’s Roscoe Holcomb, for whose music the term “high lonesome sound” was coined), Matsson has achieved notable subsequent success while still remaining under the mainstream radar. A regular visitor to Ireland, this time around Matsson will be plugging his latest album, I Love You. It’s a Fever Dream, which Pitchfork described as a series of songs “rich with observations of the world”. TCL

ALS x HANG DAI with MOOMIN
Hang Dai, Dublin
This year, the people behind Another Love Story and the culinary wizards in Hang Dai Chinese have worked on special parties that combine great food and great DJs, taking full advantage of the customised Hatchett sound furniture sound system. You can enjoy tunes from the ALS Shift Shack Soundsystem and the German DJ Moomin, who takes a particular fancy to deep house, hip-hop, funk and jazz. Tickets for this event are €10 if you book online or €13 on the door. LB

HOMEBEAT PRESENTS: HANIA RANI
Unitarian Church, Dublin
Pianist Hania Rani has performed in some prestigious venues across Europe, including the National Philharmony in Warsaw and Funkhaus in Berlin. She has composed for and collaborated with contemporary electronic musicians such as Christian Löffler, Dobrawa Czocher and Hior Chronik, writing music for strings, piano, voice and electronics. This gig is a chance to get her on her own for a solo piano recital in beautiful surroundings. Her debut album Esja is a compelling record that soothes the senses. LB

LIZZO
Olympia Theatre, Dublin
It has taken Detroit, Michigan’s Melissa Jefferson almost five years to strike it very, very rich. Before the early swathe of critical acclaim and subsequent mainstream success of this year’s album, Cuz I Love You (her third), Lizzo was a sleeper superstar awaiting her alarm call – it took two years for her 2017 tune Truth Hurts to top the Billboard Hot 100 charts. To say she is here and now, though, is an understatement. This show, of course, could have sold out 10 times over, but maybe that’s for next year. For now, anyone lucky enough to have grabbed a ticket in the scrum several months ago has something very special to look forward to. Gig of the week, no question. TCL

CHERYM
Whelan’s Upstairs, Dublin
Derry has an enviable tradition of producing sturdy pop/punk groups of the highest order (“big, riffy f**k-off kinda attitude – it’s what we grew up with”), and so, in many ways, three-piece Cherym are no surprise at all. And yet their influences mark them out as good ’uns: a bit of grunge, hints of Bikini Kill and Babes in Toyland, and their home turf’s love of a snagging pop chorus combine to create a sequence of tunes that make you sit up and pay close attention. More power to their arms, etc. TCL