La cucina/Adina review: A production so busy it ties itself in knots 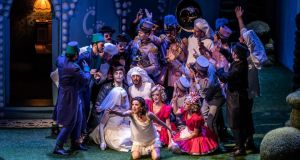 O’Reilly Theatre, National Opera House
★★★☆☆
The year 1990 is beginning to look like a key turning point for Irish opera. The world premiere in London of Gerald Barry’s first opera, The Intelligence Park – which Michael Colgan brought to the Gate Theatre in Dublin – turned out to be the start of an opera boom among younger Irish composers .

Barry went on to receive a rare television-opera commission from Channel 4, and his work has since travelled to the Aldeburgh Festival, English National Opera, the Royal Opera, Covent Garden, Los Angeles and New York, as well as around Europe and Ireland.

Also in 1990, a trio of close friends studying music at Trinity College Dublin were, probably unwittingly, readying themselves to leave major marks on the country’s operatic history. The conductor Fergus Sheil went on to work with Opera Ireland, Wexford Festival Opera, Scottish Opera, Wide Open Opera (which he founded in 2012) and Opera Theatre Company, before merging the last two to form Irish National Opera in 2018.

The work is a tour-de-force for the Dublin soprano Máire Flavin, whose high-emission singing drives the piece forward, and who also has a few reflective moments to show the wonderfully pared-back intimacy of which she is capable

Sheil has been a staunch promoter of Barry’s work, and also of the work of his fellow TCD student Donnacha Dennehy, founder of Crash Ensemble, whose theatrically elaborate operatic collaborations with the writer Enda Walsh – The Last Hotel and The Second Violinist – have gone on to make international waves. Earlier this year Dennehy’s The Hunger became the first work by a living Irish composer to feature on the Abbey stage since AJ Potter’s The Wedding, in 1981.

The the last of the TCD trio, the multitalented pianist, composer, arranger and educationalist Andrew Synnott, has just become the first living Irish composer to have a work presented on the main stage of Wexford Festival Opera.

His La cucina is an initiative by the opera director Rosetta Cucchi, Wexford’s incoming artistic director, who wanted a pairing for her festival production of Rossini’s Adina, a work subtitled The Caliph of Baghdad. She wrote the Italian libretto, and Synnott provided the score for the prehistory of the cake from the wedding that is at the heart of Rossini’s opera. Cucchi ends La cucina with a Rossini quotation about eating, singing and loving, to create a further link between the two works.

La cucina is a kitchen comedy set in a professional kitchen where a demanding prima-donna-ish chef who works without speaking has an epiphany and accepts that his staff can do just as well without him or his rare special ingredient.

The work is a tour-de-force for the Dublin soprano Máire Flavin, who manages and negotiates the behaviour of all concerned. Her high-emission singing drives the piece forward, and she also has a few reflective moments to show the wonderfully pared-back intimacy of which she is capable.

Andrew Synnott’s music is, happily, entirely without the helping of syrup that often disfigures writing that lives so fully in the past

Synnott’s music is a skilful blend of any number of mid-20th-century styles, French in its instrumental polish and, happily, entirely without the helping of syrup that often disfigures writing that lives so fully in the past.

Cucchi’s production is a romp, but the romping in Adina is of an altogether more intense order. It’s as if her goal were to mask the fact that Adina has just five singing characters. There’s a riot of activity on Tiziano Santi’s set, a giant representation of the three-layer cake from La cucina, and a riot of colour from the costumes of Claudia Pernigotti. So much of a riot that it all becomes a kind of blur.

After an off-centre start the Irish mezzo-soprano Rachel Kelly tackles the title role with full-voiced brio. Levy Sekgapane, a South African tenor with a crystal-clear voice and the seven-league boots to get nimbly around Rossini’s vocal challenges, is her true love, Selimo. The Italian bass-baritone Daniele Antonangeli brings welcome suavity as the Caliph. Michele Spotti conducts with energy. But the production is so busy it effectively ties itself in knots.