Is the music industry now entirely in the hands of live promoters?

Promoters are now running artist development. Will we be left with little more than entertainerbots? 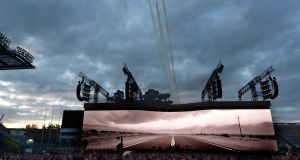 This week, the man behind MCD and now chairman of Live Nation UK & Ireland, Denis Desmond, gave an insightful interview about his industry to Music Business Worldwide. In it, he rang the death knell of fat-cheque advance deals from record companies.

“The big change is that initially bands toured to sell records and now the live income is the major source for most artists, and the record is the trailer for the gig. [Record company] investment is probably more about time and effort than it ever was, and less about money,” he said. “The days are gone of big cheques and big advances. No one’s spending a million making a video these days.”

Tell us something we didn’t know, we muttered. And then he did.

“A lot of the deals we [Live Nation] are doing are development deals, where I suppose we have kind of replaced the record companies, from an advance point of view,” he said. “So when you have artists coming along saying they would like to spend X on production, because we’re about to go on tour, that money can come from Live Nation, and that’s us investing in the artists, that’s us saying we believe. And it can be a big investment.”

The idea of the live promoter nurturing new artists does, in many ways, make perfect sense. It’s another way the music industry’s structure is changing with the times. It leads to a more direct relationship between the artist and the biggest area of growth in the music industry (factoid: Live Nation sold 26 per cent more tickets in June 2017 than last year), and it’s a logical investment for promoters to make – after all, they’re the ones profiting from an exciting music scene.

And critically, it solves a finance issue as no one else is developing artists. Arts funding is notoriously scarce and record companies are playing it so safe that if you’re name’s not Ned Sheeran, they’re not interested. So in the last few years, the main viable options are selling your heirlooms to self-fund, or selling your soul and featuring your song in an ad. Given someone’s got to pay for the three-star lifestyle that characterises the band’s first few gigging years, it’s long-overdue.

That said, we should keep ourselves wise to the shortcomings of this structure, especially as the live music industry isn’t always a benevolent force enthused about sharing the power of music with the world (we know this because some are affiliated with secondary ticketing sites).

If these deals take off, it may mean a musical landscape skewed to the needs of the live audience, which leaves little space for acts who take years before their live performances catch up with the strength of their records, for example The National and The XX. And we might be letting ourselves in for an army of Robbie Williams-esque entertainerbots who know how to cultivate hands-in-the-air moments but fail to provide the emotional connection we get from unshowy, nuanced music best listened to in dark bedrooms at 3am.

Of course, another concern is for the newbie artist at hand. We can expect investors to take a cut of resulting ticket sales. But in this new world where there’s no set standard, does the promoter take a cut of their merchandise? Does the artist owe them a share of live sales forever more? Can they realistically argue against this?

The real issue is about monopoly, competition and choices. Globally, Live Nation and AEG are the two promotion behemoths, taking up 70 per cent of the business between them. It means that new artists with their sights on a world tour won’t have much negotiating power if faced with an unreasonable set of terms for this development/survival money.

The likelihood of a tough deal is made more acute by the hybridisation of the industry. Many promoters have expanded to include artist management in their empires. Live Nation, for example, now manages 500 artists under its Artist Nation wing, including Paul McCartney, Lady Gaga and U2. That figure doubled in three years, suggesting it’s a key element of its business strategy.

Strictly speaking, the management company isn’t compelled to use its promoting arm, but when the artist knows the bargaining power that will be behind a major promoter, it makes total sense. That’s not quite the case, though, for new artists who rely on their manager’s advice. Could they be assured that their manager would negotiate the best deal from the parent company that pays the manager’s wages?

This, of course, is how global businesses remain global businesses. As the traditional win-win equilibrium between act, management, record company and promoter falls to the wayside, just like the music industry itself, the balance appears to favour the profit-oriented large promoters.

We’d hope the deals to which Denis Desmond refers are fair contracts designed to lend a hand in 2017. Because everyone would benefit from an actual choice of stadium headliner in 2027.

Naoise Dolan: My personal life is nobody else’s business
10