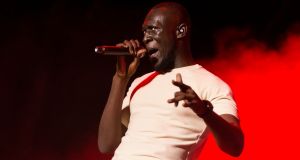 Stormzy is one of the early favourites on this year’s Mercury Music Prize shortlist. Photograph: Ignacio Brotons/EPA

Ed Sheeran will face off with friend and collaborator Stormzy in the battle for this year’s Mercury Prize.

It marks Sheeran’s first appearance on the shortlist and comes after a record-breaking year for the 26-year-old which has seen him dominate the UK charts.

The xx and Alt-J will be hoping to collect their second Mercury crown after previous successes in 2010 and 2012 respectively while the inclusion of spoken word poet Kate Tempest’s Let Them Eat Chaos marks her second time on the shortlist.

Seven debut albums are up for the award, with singer-songwriter Sampha’s Process and rapper J Hus’ Common Sense joining Stormzy in reaching the list for the prize with their full-length releases.

Indie pop band Blossoms, rapper Loyle Carner, jazz-inflected group Dinosaur and London four-piece The Big Moon are among the other nominees whose records are up for the prize.

Completing the shortlist are Glass Animals with their sophomore effort How To Be A Human Being.

The shortlist for the Hyundai Mercury Prize, which recognises the best British album of the year, was narrowed down by 12 judges including musicians Jamie Cullum, Ella Eyre, Lianne La Havas and Marcus Mumford.

“What these artists have in common is an infectious pleasure in music making and an arresting sense of urgency about the music they make.

“They delight in exploring musical possibilities and refusing to be pinned down by genre conventions.”