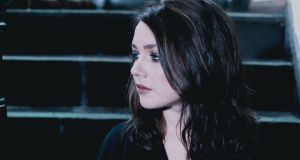 Patricia Scanlon: 'This is not about us as women, trying to push men aside, but instead for us all to move forward into a new space together.' Photograph: Fiona Morgan

When was the last time you were at a traditional or folk music gig or festival and noticed how many (or in truth, how few) women were in the line-up? Scan the myriad traditional music bands on the road, and in general, you’ll find a sole female singer/musician in their midst.

What started last November as a question from the stage of the Liberty Hall Theatre from singer Karan Casey, when she found herself the only female artist amid a melee of men at an Armagh Pipers Concert, has morphed into a grassroots movement called Fair Plé: a coalition of women and, crucially, men too whose aim is to achieve gender balance in the production, performance, promotion and development of Irish traditional and folk music.

It’s an aim that’s as broad as it is long, and one that doesn’t lend itself to easy answers, Dingle singer Pauline Scanlon contends.

“You know, we’ve been talking about it amongst ourselves, about our experience of often being the only woman on stage with 15-20 men,” she says. “It resonated with all of us. And in line with the worldwide women’s movements of last year and this year it just seems that we now have an opportunity to address it alongside sister movements like the PRS Keychange and Waking the Feminists.”

Keychange is a pioneering international initiative which, among other aims, challenges festivals to achieve a 50-50 gender balance by 2022. The past two years have seen many issues of gender equality from equal pay to sexual harassment and subliminal sexism debated at length in mainstream and social media. Now it’s the turn of our indigenous music forms to turn the mirror on itself.

“Fair Ple is an organisation of questions rather than answers”, she says. “Plé is the Irish word for discussion, and we were very considered in our use of that word because what we are doing is initiating a discussion. We feel that in our own community if we don’t discuss it in our own realm, we’ll be left behind.

“What we are doing is acknowledging that equal representation is not there,” Scanlon continues, “but what we’re trying to work out at the moment is what the barriers are: because we know that there are broader societal issues. It’s very difficult if you’re a young girl seeking out a career as a musician and you don’t see yourself represented as a tangible option to have a career, to pay your bills. You have to push through that somehow, and with Fair Plé we’re trying to work out how we do that.”

Are traditional and folk music actually worse than other art forms? Tara Finn, a musician and music teacher from Sligo, thinks it’s definitely not genre-specific.

“I just think that it reflects every aspect of society” she says. “It’s blatant in Irish traditional and folk music. Things are changing out there in the wider world but I think that it needs a bit of a push.”

The climate certainly seems ripe for these conversations to find traction. Scanlon is adamant that Fair Plé has nothing to do with laying the blame at men’s doors, and everything to do with stepping back and casting a cool eye over all the factors that have led to so few women pursuing professional careers in traditional and folk music, at a time when girls possibly outnumber boys in music classes across the country. What is this precipice that leads to them disappearing once career choices have to be made?

“There are no easy or obvious answers”, Scanlon insists, “but we need to look at how it’s [the world of professional music] constructed and to possibly deconstruct it so that it’s fairer for everybody. This is not about us as women, trying to push men aside, but instead for us all to move forward into a new space together.”

Gender balance in music isn’t all that much to ask for, really. Scanlon is just back from Australia, where she witnessed gender-balanced line-ups at the Blue Mountains Folk Festival. She cites this year’s Cambridge Folk Festival programme as another shining example: one born of thoughtful programmers taking the time to interrogate their own often subliminal biases, and overcoming them.

The language used to describe female musicians must also be examined, they believe.

“The number of times I’ve been introduced on stage as ‘a lovely girl’ or a ‘gentle girl’ when the piece I’m playing may be technically demanding and complex!”, Finn says, her frustration palpable.

Scanlon is also quick to acknowledge that although she’s toured extensively as part of the female duo Lumière, with Éilís Ní Cinnéide, she has also assembled all-male bands around her for almost 20 years on the road with other projects.

“There are societal and cultural obstacles which girls and women have to overcome to get where they need to be, but I think we have to recognise that there is an enormous pool of incredibly professional and amazingly talented women already here who are under-represented.”

Traditional music has an impressive history. Seminal singers Bess Cronin and Sarah Makem and concertina player Mrs Crotty have occupied central roles, singing and playing in their own homes.

“We’ve now taken this huge leap where it’s a viable career option for women,” Scanlon offers, “and I think that working conditions need to take a leap in line with this change. In line with other professions. Because we’ve chosen a career in the arts, we owe it to each other as a community to talk about it.”

Support for Fair Plé is gathering momentum. As well as the diverse mix of female musicians, many male artists have also lent their support, from Martin Hayes and Damien Dempsey to Dónal Lunny.

This isn’t about a turf war. It’s just about taking a big, deep breath and moving forward together

“Fair Plé is also about celebrating inclusivity and equality where it exists, and where participation is balanced in many ways,” says Scanlon. “Our job is not to lay the blame at anybody’s door but just to ask of our community, why do we think this is?”

One of the first tasks Fair Plé has set itself is the creation of a directory of female musicians so that women are no longer hiding in plain sight. On June 9th, Lá na mBan, they’ll host a positive musical activism, and in September a two-day event with concerts, discussions and much more.

“Even though this is a gender issue, it’s important that it doesn’t become a gender argument,” Scanlon says. “It actually detracts from the focus of what we want to achieve and how we achieve it. This isn’t about a turf war. It’s just about taking a big, deep breath and moving forward together.

“We’re building on other feminists’ work,” she adds. “One hundred years ago we got the vote. Forty years ago was when women ceased having to give up their job when they got married. So now we’re building on all that those amazing feminists did. And there’s no shame in calling yourself a feminist.”

Beyond Netflix: where to find Golden Age classic movies
7