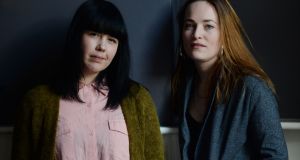 A Night of Musical Stories: Katie Kim and Radie Peat of Lankum are teaming up for a new project for the MusicTown festival in Dublin. Photograph: Alan Betson/The Irish Times

Have you heard the one about the traditional folk artist and the ambient pop musician? They met several years ago, became fast friends and are now bringing their disparate musical worlds together for a one-off gig in Dublin later this month.

Fortunately, it’s no joke: Radie Peat and Katie Kim are sitting in a bar in the city centre, sipping tea and chatting about their forthcoming show, which – on paper, at least – sounds like it simply shouldn’t work. How, you might think, could Peat (best known for her work in celebrated “Dublin folk miscreants” Lankum) and Kim (aka Katie Sullivan, a solo artist renowned for her spellbinding, slow-burning cinematic indie-pop) find any kind of common musical ground?

“At first, I was a bit ‘Oh god...’,” admits Kim, smiling. “It was nerve-wracking for me, because myself and Radie have very different voices and initially I was really intimidated, to be honest. But when we got the actual go-ahead for it, I was forced to think about it properly – and it’s actually been really exciting.”

“I had the same sort of reluctance, because obviously we do make very different kinds of music,” adds Peat. “And because I really love Katie’s music as well, I was very nervous about it. What made me less nervous, though, was the fact that we actually sang together at Adrian Crowley’s album launch last October; we got to do swoony backing vocals together and that was really fun. It was almost like a test of what it might be like.”

The pair initially met two years ago, when Peat’s other band Rue were playing in a support slot at a Dublin pub. Having mutually admired each other’s work from afar, they struck up a conversation after realising they shared mutual friends and musical colleagues. The possibility of their collaboration – which takes place as part of the MusicTown festival – was first mooted by Jon Pearson of Crash Ensemble, the contemporary music ensemble that Kim had worked with previously.

“I just got a message from him one day saying ‘How does a Radie/Katie thing sound to you?,” she explains.

Peat acknowledges that one of the biggest challenges for her has been learning to sing with a female voice. “With both bands I’m in I sing exclusively with men, so singing with another woman is different,” she says. “I think we have very similar register voices as well – so you use different parts of your voice, which is both interesting and challenging.

“It’s definitely out of our comfort zone for both of us, I think. But the one thing that’s been good is that our taste is really similar; when we agree, we agree.”

A Night of Musical Stories will see the pair performing songs both old and new – they are reluctant to “spoil the surprise” but some will be from their own respective canons, others drawn from the folk annals and others still from a more contemporary era (there’s one from a “very new Irish female artist” in the mix). All will feature new arrangements by the duo.

Most songs were bound together by a particular theme that Kim says they happened upon accidentally. “I thought that if it was going to be a night of general sporadic songs and ideas, that’s fine – but I remember talking to Radie about musicians who were really good storytellers, and I thought that she had a really good knowledge of really interesting traditional songs; songs with dark, twisted tales in the background,” she says. “When you look into the background of some of these songs, they’re incredibly written and there’s so many different versions, so it’s really interesting to go in and play around with them. Then I think Radie just texted one day and said ‘Jesus Christ, the entire set has this theme!’ and we decided it was ‘female villains’.”

Says Peat: “It’s nothing about making some kind of statement on the times at the moment, either; it just turned out that way, rather than being part of some movement or manifesto. [The show] is still about love and death and all those things, too.”

The biggest challenges, they say, have been different for each artist. For Kim, it was getting used to working with someone in a “from-the-ground-up” collaborative project (she has worked with many artists, including the Waterboys, but usually came in late to the process, or added her vocals to an almost-finished song). For Peat, it was finding a middle ground that was true to both musicians while also pushing herself personally.

“We are from different musical worlds,” she reiterates. “I’m playing electric guitar at this gig, which I’ve never done at a gig before. But you can’t just stay in your own area; you have to meet in the middle. That’s been less difficult than I thought it’d be, though... although we’ll see what happens with the reverb on the night.”

Whatever transpires with their unusual blend of sounds – electric instruments, acoustic instruments and different types of vocals – one thing is for sure, says Peat. “It definitely sounds very... dramatic,” she says, with an enigmatic smile. “Because female villainy isn’t something to be taken lightly – so it’s not going to be all major notes and happy, chirpy songs.”

Whatever the outcome, both agree that they have learned a lot. “It’s made me a lot more confident in terms of approaching material that I never really thought I could approach before,” says Kim.

“It’s been brilliant to see how Katie arranges stuff – it’s really informative to watch,” adds Peat. “And also getting to play different stuff, songs that I would never have dreamt of approaching if it was just me on my own . . . [it’s] really energising to try something that seems off-limits and find that it works.”

A Night of Musical Stories is a one-off show, at least for now. “I hope that people go away from it feeling in some way emotionally affected – because there’s a lot of emotional weight to these songs,” says Kim. “I’d like people to go away thinking ‘That was a great night of tales’. You know when you see a really good film and you’re thinking about it for a while afterwards? That’s what I would like people to feel after seeing this show. So hopefully, we can do the songs justice.”

The best of the rest of Musictown 2018

Collaboration and community are the themes of this year’s festival, in various venues across Dublin on April 13th-22nd.

Some of the best picks are at the Abbey Theatre, including British folk band The Unthanks with the Orchestra Ireland conducted by Charles Hazlewood on April 17th and 18th; Dubliners legend John Sheahan will team up with fellow fiddler Colm Mac Con Iomaire (the Frames) on April 21st; Lisa O’Neill will collaborate with author Pat McCabe and American musician Cass McCombs on April 20th, and Little Green Cars will work with painter Andrew Vickery on April 19th.

There are numerous other events – many of them family-friendly, some of them free – at other junctures around the city. Check musictown.ie for the full programme.