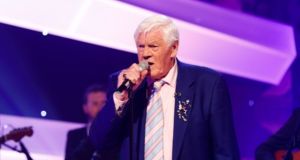 Irish country singer Big Tom McBride has died aged 81, his family have said in a statement.

“It is with great sadness that we announce the passing of our dear father Big Tom McBride (RIP) this morning,” said a statement on Facebook on Tuesday morning.

“Dad passed away peacefully in the company of his family. He will be sadly missed by all who knew him. May he rest in peace.”

Big Tom started his lengthy career in country music in the early-mid 1960s as a member of the Mighty Mainliners Showband. After some years of traversing the length and breadth of Ireland on the ever-busy showband circuit, in 1966 the Mighty Mainliners appeared on RTÉ’s Showband Show, performing the song Gentle Mother, which gave the band their first sizeable chart hit.

From the early 1970s, the band name of Big Tom and the Mainliners was adopted. Other hit songs followed, with the band and during his solo career – Four Country Roads, The Old Rustic Bridge, Back to Castleblaney, Old Log Cabin for Sale and Broken Marriage Vows – in a career that effortlessly swatted away constantly evolving music trends.

It was the Irish heartland of the 1950s and 1960s that McBride was most used to engaging with, people who had emigrated from provincial towns and villages to (primarily) the UK’s midlands and north, where McBride continued to be immensely popular until ill health prevented him from touring.

Ireland’s ongoing love for country music has meant that McBride’s contribution to it was never forgotten. His influence on the likes of Daniel O’Donnell and the younger generation of country performers such as Nathan Carter can’t be underestimated.

In an interview with this writer last year, Carter remembered as a young boy being surrounded by country music and being taken by his parents to the Irish Centre in Liverpool most weekends.

“Irish showbands and music acts such as Big Tom and Philomena Begley would be playing there on a regular basis. They’d be singing the country songs and I’d be sitting there watching them.”

In 2016, Tom McBride was inducted into the Irish Country Music Awards Hall of Fame. It is expected that this Friday’s Late Late Show Country Special will feature a tribute to McBride.

President Michael D Higgins led tributes to the singer on Tuesday, praising him as “one of the most charismatic and influential” artists in Irish country music.

“Lovers and supporters of Irish music everywhere will have heard the news of the death of Big Tom McBride with sadness,” said the President in a statement.

“As one of the most charismatic and influential artists in Irish country music, Big Tom was widely respected and through his five decades of music making he leaves a lasting legacy.

“His name will be recalled with fond memory by those who listened, and danced to, his and his band members’ generous nights of entertainment all over the island of Ireland.

“A big personality and one of the country’s greatest country stars, his love of music and his passion and skill have enriched Ireland’s music scene.”

The President expressed his sympathies to Big Tom’s family and friends, including his children, Thomas, Dermot, Aisling and Siobhán, and to “the countless numbers of people, at home and abroad who loved the man and his music.”

O’Donnell said McBride was a bridge for generations of Irish emigrants whose connection to home was played out in the urban dance halls of England.

“He was the pillar. We all referred to him as the king,” he said.

“He reached out to people in Ireland and those people who had emigrated from Ireland in the days when so many people lived in England, and their whole connection with Ireland was the bands or at the weekend and the National, the Forum and the Galtymore and all the dances around London and Manchester and Birmingham.

“He was such a connection and his music, there was something about his music.”

Mr O’Donnell recalled a special show for Big Tom at the “Opry” in Derry’s Millennium Forum last August, where country music stars gathered to pay homage to one of their heroes.

“He did the show himself, and (his wife) Rose was there,” he said.

“It was such a terrific night that he was able to do that show, and then when the flood (fundraiser) concert was on in Letterkenny, he came along. He wasn’t even asked to come and he was terrific.”

Mr O’Donnell said Big Tom’s family can take comfort that he was doing what he loved most right up the end of his life.

“Big Tom was the one that everyone saw as the main man,”he told RTÉ’s Ryan Tubridy show.

He said: “He was a big man in stature, but his personality was big. It wasn’t because he was loud or took over the space in conversation, it was just his presence.

“There are people who have a presence and Big Tom had it in abundance when he walked in somewhere.

“He will be missed so, so much. There are no words to explain - he was the greatest.”

Mr O’Donnell said McBride’s life would have been “a darker place and less joyful” since his wife Rose died in January this year.

“In the past number of years especially, every step Tom took, Rose was a step behind him,” he said.

“It was a huge loss for him. I can’t assume anything other than there is a great reunion in heaven today.”

Country singer Declan Nerney said Big Tom’s music was “like a religion” to his fans.

“People who bought into Big Tom’s style of music, it was like a religion, particularly for the emigrants away,” he said.

“He reminded them of home, he was home.”

Broadcaster and journalist Michael Commins, a long time friend of Big Tom, said the singer “epitomised everything that was good about rural Ireland especially.”

“(His wife) Rose said to me a few years ago in Bundoran that he saw a queue outside for him on a summer’s evening and said ‘I can’t believe they are still coming to see me’,” he Northern Sound radio.

Mr Commins said: “There will never, ever be anyone remotely like Big Tom again, because he was the king of country music in Ireland by a mile.

“People loved him . . . he was like another member of so many families.

“He was an Irish phenomenon which will never be seen again.”

“He was the one the elitists sort of looked down their noses at, and Big Tom outlasted them all,” he said.

“At his last gig, he was able to bring a thousand people into his show who still adored the ground he walked on, who still loved him as a friend and a singer, who still appreciated what he had did for them, who still made their hearts want to dance when he opened his mouth and sang.

“Tom was one of them but he was their king as well.”

YA fiction: Children of Lir’s Aífe tells her side of the story
8